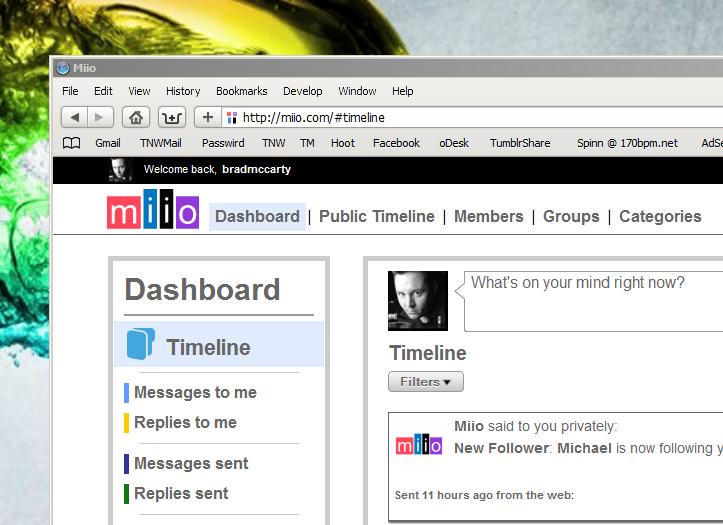 Over the past couple of years, we’ve seen quite a few social networks come and go.  The ones that have stayed strong (Twitter and Facebook, primarily) have done so because they focus primarily on a couple of things and doing them extremely well.

miio is hoping to capitalize on the simplicity of Twitter, while expanding into features of Facebook and even FriendFeed.  So far, I really like what I see because it appears to be built from the ground up to be a centralized place that you can use feed to Twitter or any site that will accept incoming RSS.

The site is broken down in to 3 primary sections, so here’s a detail on each

Unlike Twitter, where your updates are generally a few words and maybe a picture, miio goes further to provide you the ability to do much more:

Each of these has the appropriate entry fields to make them viable, but they also each have a Metadata box that really makes it interesting.  All of this metadata gets sorted by miio to help make  up the other sections of the site.

While Twitter Search is amazingly handy, it’s often very noisy.  The Categories section of miio appears to be headed toward something that’s much more organized.  As the site goes through the metadata of each post, it’s thrown into the appropriate category.

Within each category, you’re able to search for the Newest, Most Discussed and Most Shared posts.  This breakdown of search is what really sets miio apart in terms of its content being relevant to what you’re trying to find. One of the biggest things to hit FriendFeed was Groups.  I’ll venture a guess and say that it will be the same result for miio.  Each Group represents a main theme (such as Music or Sports) and then there are sub-groups within them.

Group owners have the ability to set permissions for public or private, as well as giving some detail about its contents.  Pretty much standard fare, but it’s a really organized system that all looks very slick.

I’m pretty excited about what miio has going on. To be honest, I miss FriendFeed because it quickly devolved into an ego-driven mess. While miio isn’t necessarily safe from this same fate, its “value-added” features certainly give it enough of a solid foundation to stand on even if things get messy.

The end result?  I’m on miio, I’m using it to feed my Twitter and so far I’m loving it.  But, miio needs more users in order to really thrive.  Right now the suggested list is filled with RSS feeds.  While there’s nothing wrong with that, you just won’t get better content than user-generated.

So come join me.  You’ll find me at http://miio.com/bradmccarty

Read next: A Trip Through Kindle: The Author's Perspective