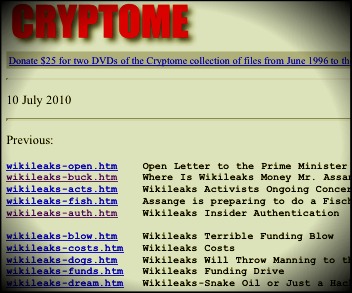 A rumour has been doing the rounds over the past few hours suggesting that Wikileaks, the popular site for whistleblowers of politically sensitive information, is to be abandoned. Is there any truth in it though? Let’s dig a little deeper…

A message entitled ‘Wikileaks Website to be Abandoned’ has been posted to Cryptome, a website similar in mission to Wikileaks itself in that it “Welcomes documents for publication that are prohibited by governments worldwide”. The message, posted anonymously and attributed to a ‘Wikileaks Insider’, alleges that Wikileaks’ editor in chief Julian Assange is dropping the project. “Within the last few hours we have learned that WIKILEAKS (Assange) will commit no more time and effort into restoring our website http://www.wikileaks.org“, it reads. The message goes on to suggest that Wikileaks will be replaced by a “completely new site” based in Iceland.

The idea that Wikileaks might shut down isn’t outside the realms of believability. It has flirted with controversy throughout its three year existence by publishing documents that have exposed, among other things, details of procedures inside the Guantanamo Bay detention centre and the alleged killing of Iraqi civilians by the US military. This has led to attention from law enforcement agencies around the world, including, allegedly, the CIA. Meanwhile, the site was temporarily suspended earlier this year as a result of a shortage of funds but was brought back following a successful fundraising drive. However, the document submission link has not been working since mid-June. Wikileaks claims this is because they are “Upgrading infrastructure to deal with growth”.

It’s also believable that Julian Assange might replace Wikileaks with a new Iceland-based website. He was instrumental in the foundation of the Icelandic Modern Media Initiative, or IMMI, which “aims to create an offshore safe haven for information” and Iceland’s liberal stance on freedom of information has proved beneficial to Wikileaks in the past.

So, while it’s within the realms of believability, is the message posted to Cryptome telling the truth? It’s impossible to say for sure, but this is the tenth message relating to Wikileaks that has been posted to the site. These posts allege financial mismanagement and ethical corruption within Wikileaks (you can see links to all the related postings at the top of the latest one). Wikileaks, via its Twitter account, has denounced previous postings as being part of a “smear campaign”. Another recent tweet reads “Disinformation campaign against WL is heating up. Demand full primary sources. Check bias. Riposte.” There has been no response to the latest post yet.

Given that these allegations are published anonymously without any supporting evidence, there’s no way to verify them. As such, while the closure of Wikileaks would be viewed by many as a travesty, especially by the journalists who find it such valuable source of important information, don’t go mourning it just yet.

We’ve approached Wikileaks for comment and will share it if we hear back. UPDATE: Here it is.