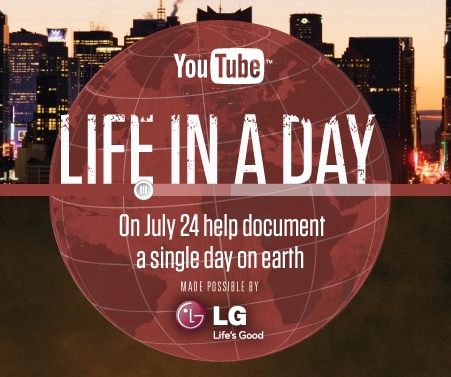 YouTube has announced ‘Life in  Day’, a project that could see your footage end up on the big screen at the 2011 Sundance Film Festival.

The film has big-name backing. It’s being directed by Oscar-winning Kevin McDonald and the executive producer is none other than the legendary Ridley Scott. The idea is that on 24 July, you record a snapshot of your life and upload it to YouTube’s Life in a Day channel. McDonald will then sort through the submitted footage to create a story about life on planet Earth on that one day.

It’s a bold idea and it could well result in something of true worth. McDonald says that he wants to receive footage of everything from the most mundane of tasks (a journey to work, for example) to more meaningful events like the demolition of a much-loved building.

If your footage is chosen to feature in the film, what will you receive? Not money, it seems. YouTube says “…if your footage makes it into the final cut, you’ll be credited as a co-director and may be one of 20 contributors selected to attend the premiere. Meanwhile, Variety reports that individuals whose footage is used won’t be paid.

Not being paid might not be a problem for some. Clay Shirky’s new book Cognitive Surplus argues that people willingly upload their own creative content for free just for the love of sharing. That may be fine for a LOLcat picture or a video blog but when your footage ends up being used by the Hollywood A-list in a movie at a major film festival it could seem at first glance a little, dare I say it… exploitative?

In reality, this project probably won’t be a major moneyspinner for anyone involved. The film is being supported by LG Electronics and Variety says that it won’t be sold to a movie studio, instead it will be made available for all to watch for free on YouTube.

Still, offering only a credit and the chance of a trip to Utah to those whose work is used in such a major production does make me worry a little for the future monetary value of user generated content. Does it set a dangerous precedent? No matter how exciting the project, we shouldn’t get used to submitting footage to Hollywood for free.

Concerns for the future aside, YouTube is bound to have a huge number of submissions for this undoubtedly exciting project. Heck, I might well take part too.

Read next: I ♥ Friction, Annoyances & Irritations