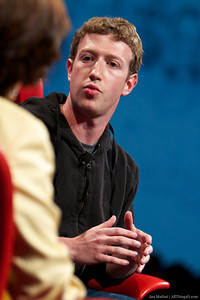 According to the AllThingsD live stream of their D8 event, Facebook CEO Mark Zuckerberg told interviewer Kara Swisher that their biggest competitor “is someone we haven’t heard of” in response to Swisher’s question of which companies Facebook considers competitors (specifically competing against the Open Graph).

According to AllThingsD, Zuckerberg had this to say about the Open Graph:

We compete with different companies in different ways. One of the things I try to do as CEO of this company is not make mistakes that other companies make — I make different ones, he jokes.

The world is changing so quickly now that I think the biggest competitor for us is someone we haven’t heard of. So we just need to stay focused on doing what we do and doing at well.

I think people look to us a the leader in this space. And I think there’s a widely held belief that we’re much closer to the beginning of the space than the end … it would be easy for us to just keep things as they are, but we don’t believe that if we did that we’d be doing the best thing for us or the industry. So we do what we think are the best things even if they are controversial.

Read next: Zuck on Facebook: "We don’t think of the company as successful".