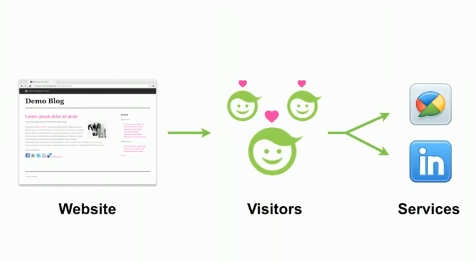 OExchange is a new open standard that allows third-party sharing services (such as AddThis, ShareThis, etc) to work together to send and receive content that people share online through these services.

So basically, if a website has an OExchange “tool” installed on their site, and the visitor does not see a sharing service that he/she wants to use, the visitor can then with a few clicks add a service and destination that they prefer (i.e. Google Buzz, LinkedIn, etc).

In a press release, Chris Messina, who is now the Open Web Advocate at Google was quoted as saying, “The key to increasing the amount and quality of sharing online is smoothing out the user interaction. By simplifying the underlying mechanism for cross-site sharing with OExchange, people can focus on what they’re sharing, rather than how.”

Sharing services are used across many kinds of websites, and there is a somewhat daunting number of them (and adding all of them to your site really crowds things up), so an open standard that makes them interoperable makes sense. Of course, a major missing partner from the list above is Facebook, which launched their Open Graph in April along with their new Like buttons.

We asked Chris Saad, co-founder of DataPortability.org and VP of Product Strategy & Community at Echo (which as we mentioned above is already signed onto the standard) if he thought that OExchange is a direct assault on the Open Graph. Saad replied, “I’m not sure that’s the case – I think it’s just yet another key step along the inexorable path to the interoperable social exchanges.”

This video gives an example of how OExchange works (go here for more on how it works on a technical level):

Read next: The Forbidden Fruit