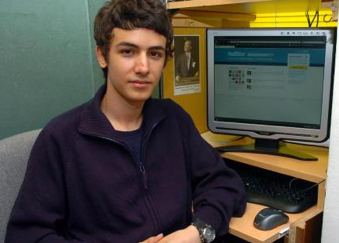 As you will have heard, last week’s big Twitter news was a Twitter bug infiltrated by a Turkish “hacker” named “Bora Kirca”. We managed to get hold of him and talked about the truth behind the news.

The Next Web Turkey: Hi Bora, twitter was shaken by the bug you found and many celebrities(Kutcher, Moore, Jim Carrey) mentioned you in their tweets. What happened after the news and tweets?
Bora: Hi. Many celebrities thought that I was ahacker and condemned me for it. They suggested I should use my skills for useful things. Many people currently think badly of me because of it all. I think this will last one or two weeks and then people forget. I’m just a student attending high school but the bad news has really affected me.

The Next Web Turkey: Many people thought that you were a hacker. What do you think about that? We know that you just found a bug by coincidence.
Bora: Hacking is a different thing and I’m far from that. I did it mistakenly and if a similar thing happens again, I’ll probably for a while.

The Next Web Turkey: So something interesting happened?
Bora: Yes, the manager of the band named “Accept” called me and I’m a fan of that band and I was clearly proud to speak to him. What we talked about will stay between me and him.

The Next Web Turkey: Your twitter account has been suspended. Is there anybody from Twitter has contacted with you ?
Bora: No, I just sent an email to them on May 10  at midnight about the bug and how it works and how it can be fixed but they didn’t reply to me. Indeed, I’m apologise to twitter about the things happened.

The Next Web Turkey: You’re a high school student do you have future plans ?
Bora: I would like to study computer engineering. I’m sure that I can prove myself in that area. I can basically understand algorithms and logic behind programming. I would like to be a good programmer in the future.

The Next Web Turkey: Some newspapers said that you have great expectations like you would like to be hired by some big technology companies. Are they exaggerating the things happened ?
Bora: Actually, I didn’t say anything about my expectations. I’m just a high school kid. I just signed up to twitter on 25th of April 2010 and found the bug at 5th of May. I just want to study my lessons and I’m expecting the people to forget the things happened.

The Next Web Turkey: Thanks for talking to us and good luck in your courses.
Bora: Thanks a lot.