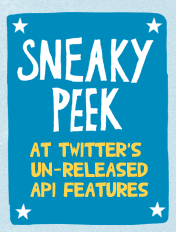 Tomorrow marks the first day of Twitter’s Chirp conference for developers, and after Twitter has been drastically rearranging their third-party landscape, the  conference is a cross-roads for future Twitter development.

With that in mind, we were very interested in a tweet from Ryan Sarver (from the Twitter API team) discussing a new, and seemingly unannounced, API that is dramatically impacting his use of Twitter. From Ryan: “can’t wait to demo this new API tomorrow @chirp. it’s changing the way I use Twitter.”

What is this mystery API? No one knows for sure, but it’s not hard to make a few educated guesses as to just what it might be. If you do a search, it is simple to see that quite a number of people are excited about the new API, which does show some strength in Twitter-developer relations. So just what is it? We’ll try and figure it out after the jump.

The image at upper right is from the Chirp conference website. We have been expecting this for some time now.

Chirp itself has six main components to it that the API could be related to: OAuth, Streaming, Geolocation, Business strategies, Mobile integration, and Roadmap. It is doubtful that the new API will be about the roadmap, so there are really five areas where the new API might fit.

Which is the best guess? Well, what has Twitter just launched? It’s advertising service. Double or nothing this API has to deal with integration of that new service (in one way or another) into the hundreds of third party applications that Twitter’s community has built. Chirp of course lists “business strategies,” so this is hardly a stretch of the imagination.

If that is the case, it opens up all sorts of questions. For developers that do integrate the advertising API, bringing the ‘promoted tweets’ to third-party applications, do the developers get a cut of the revenue? Loic Le Meur thinks so and believes Twitter will be generous too, after all “the last thing that would be good for Twitter is that all the apps die.” If Twitter could monetize its community and itself in one fell swoop, that would be an amazing accomplishment.

And as a final point in the court of the API being related to the new Twitter ad platform, discussion on the Twitter Development Talk Google Group has this thread. Some updates on the new ad platform will be “slowly coming out — there will be a lot more details over the next few days through Chirp.” Could one detail be this API?

Either way, expect something big to drop tomorrow at the conference that will hopefully buck up developers who feel left out to dry after Twitter bought Tweetie and launched an official Blackberry application. After all, without its development community, there would be no Twitter as we know it.

Read next: Echofon for the Mac Officially Released. Clean, Simple With Lots of Unique Features.