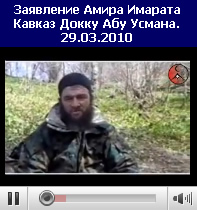 A video uploaded to YouTube records Doku Umarov, a Chechen separatist, claiming credit for Monday’s attacks, as reported by The New York Times.

In the video, Mr. Umarov, speaking in Russian, explains that the terror operations carried out in Moscow were reprisals from earlier attacks on Chechen civilians on February 11th by Russia’s security forces. He goes on to state that these operations will continue to bring terror to populated areas of Russia.

Before this kind of accessibility provided by Social Media, viewpoints from groups like that of Mr. Umarov’s went through several filters that edited, shortened, and provided ready commentary for the regular person about what is being expressed. By utilizing a public forum, the separatist points are available uncut and direct to the masses.

Whether it scares, horrifies, or forces people to think of a different viewpoint, it does accomplish a shift in the mindset of the viewers and places pressure on the government that would not be there without this access.

[via The New York Times]