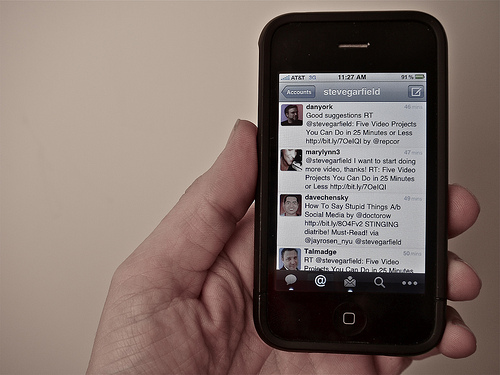 Twitter wants to change the world while some politicians are trying to silence it.

In an interview with the BBC this week, Twitter co-founder Evan Williams said “Our goal at Twitter is to be a force for good… We have a fundamental belief, having worked on this type of thing for 10 years, that the open exchange of information has a positive impact on the world.”

Bold words, but some politicians don’t agree with that line of thinking. In the UK, a number of local councils have recently banned live tweeting from meetings.

Tameside Council caused a minor storm this week when it restricted use of Twitter-based reporting of meetings to journalists from three newspapers. As The Guardian reported, one local blogger was actually asked to leave the public gallery after trying to tweet from his iPhone.

Meanwhile, Trafford Council went the other way and banned accredited journalists from reporting via Twitter from a controversial planning meeting on Thursday. Trafford’s Councillor in charge of planning decided the Manchester Evening News couldn’t live-tweet the meeting despite a high level of public interest. Oddly, they did nothing about a number of members of the public tweeting there.

Some councils are even banning themselves from using Twitter during meetings.

It seems some politicians don’t know what to do about Twitter. The irony here is that in this general election year in the UK, politicians will be turning to it like never before to engage with voters. Many councils happily use Twitter accounts to put out official messages, but social media is a two-way street and you can’t use it as a promotional tool while simultaneously banning the public from using it to report on what you’re doing.

Although many may disagree with their stance, these councils have the law on their side in banning Twitter. Tameside Council told journalist Sarah Hartley:

“…there is no right to attend a council meeting and make a transmission of the meeting whilst it is taking place, or to make recordings of any meeting, this applies to all Local Authorities. Therefore the Council is obliged to consider specific requests to use media such as ‘twitter’.”

It’s understandable that in days gone by this rule made sense. However, hiding behind an outdated law in a changing world is no excuse. Only when councils learn to relax and allow will Evan Williams’ dream be realised and an “open exchange of information will prevail”.