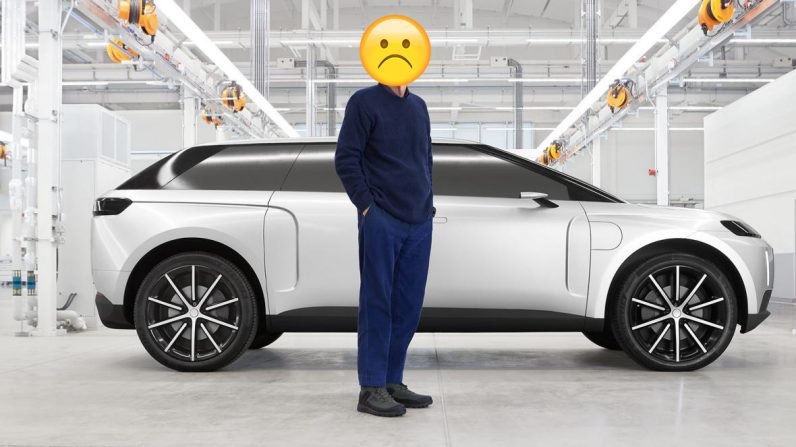 Despite his company’s best efforts, British inventor and entrepreneur James Dyson killed his firm’s electric car project last year as it did nothing but hoover up funds, including his own money. But something good still might come out of it.

In an interview with The Times, Dyson finally unveiled his company’s electric vehicle prototype, which was originally supposed to be launched this year had it all gone to plan. He also revealed how he funneled £500 million ($605 million) of his own money into the project. It’s not like that really matters though, because he just topped The Sunday Times’ UK rich list.

According to Dyson, the car would have touted a 600-mile range battery. That’s enough to make Teslas look a bit weak. Most internal combustion engine vehicles would struggle to hit this range too.

That 600-mile expectation came from Dyson‘s battery engineers. Given the vacuum cleaner’s pivot to cordless devices in recent years, the company holds a strong understanding of how to make high-power, quick-charging Lithium-ion batteries like those found in modern EVs. Dyson‘s engineers are also no stranger to developing motor technologies.

The car would have been a bit of a beast too. According to the report, the prototype is more than five meters long, two meters wide, and 1.7 meters tall. In other words, it would have been a hair longer and wider than a Range Rover, but not quite as tall. Despite being electric, it won’t have been that friendly to cities.

Perhaps the most unique feature though was the Dyson car’s wheels, or more specifically their size. When shod with special low rolling-resistance tires, they’re about a meter (40 inches) in diameter. That’s really quite insane. It would have made the wheels somewhere around 10 and 20 inches wider than a fairly standard tire on a 21-inch rim. There’s method in the madness though: bigger wheels roll better, meaning improved range and economy.

But alas, it was not to be. Dyson would have had to sell the car for £150,000 ($181,000) just to break even. That kind of money could get you one of the more powerful all-electric Porsche Turbo S Taycans. I know which badge I would rather look down and see on the steering wheel as I glide through the world hugging trees and high-fiving bees.

Ultimately, the car was too expensive to manufacture. Which isn’t entirely surprising given that Dyson has very little experience in building vehicles.

Given its specialty is making household appliances, Dyson would have had an uphill struggle trying to convince the public to buy into its foray into electric cars too. But in many ways, Dyson‘s EV explorations weren’t totally fruitless, and I think it could work out for the best.

While Dyson has killed its EV project, it kept most of its staff. Many of the 500 people working on the project are continuing to work on battery technology, robotics, air treatment, and lighting, Dyson told The Times.

Dyson thinks it can be successful in supplying its solid-state battery tech to other carmakers. If it’s capable of making batteries with 600 miles (1,000 km) of range, the industry could get a nice little boost from a new battery supplier.

Adding to the company’s existing knowledge, patents, and understanding of battery tech could lead to further important breakthroughs for the industry. And unlike others in the industry, Dyson is open to the idea of sharing its tech with people who actually know how to make cars, so we could get the best of both worlds. So in the end, I’m kind of glad Dyson’s EV won’t make it to production.

Update, May 19, 2020, 1400UTC: The original version of this article suggested that Tesla isn’t open to the idea of sharing its tech with other EV makers, which is ambiguous. Back in 2014, Elon Musk said that Tesla would allow competitors to view its patents in good faith.

In 2019, Tesla and Daimler were allegedly in talks to find a way of working together, but nothing appears to have happened since. In 2017, Tesla’s partnership with Toyota broke down as the Japanese carmaker sold its stake in the company.

While Tesla may have let competitors view patents, this doesn’t appear to be exactly what Dyson is suggesting it will do. What’s more, if Dyson isn’t going to make a vehicle, it will never be in competition with those that it supplies or works with, which was ultimately the reason Toyota stopped working with Tesla.

Read next: Here's why 'if you build it, they will come' is shitty advice