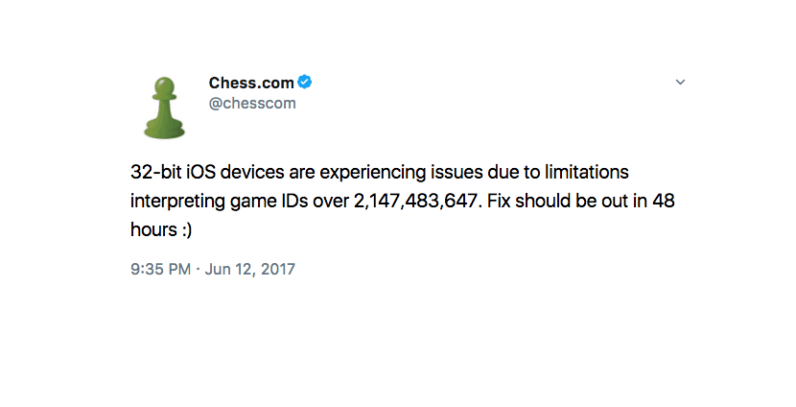 You might have to wait a few days to make your next move on Chess.com if you happen to play the game from a 32-bit iPad or iPhone device.

In a comical turn of events, yesterday the popular platform unexpectedly stopped working on 32-bit iOS devices after its counter clocked a total of 2,147,483,648 games played. In case you’re wondering what the significance of this figure is: It means that Chess.com officially broke the 32-bit integer limit.

As a result of this otherwise triumphal achievement, numerous chess players were suddenly no longer able to play the game from their old iPads and iPhones equipped with 32-bit architecture. The issue came about due to the fact that 32-bit devices don’t support interpretation for numbers higher than 2^31.

The Chess.com support team has since confirmed the technical issues, assuring that the company is currently looking into the matter and that a solution will be available within the next 48 hours.

Meanwhile, avid players can resort to playing on the the web-based version of the platform which is still up and running. Needless to say, iOS devices running on 64-bit architecture remain unaffected – so borrowing a newer device could also be an option.

While rare, Google similarly ran into this issue a few years back when PSY’s smash-hit song Gangnam Style breezed through the 2,147,483,647 limit to break the YouTube counter.

As Chess.com is doing now, Google eventually upgraded the maximum value for its variables to 64-bit integer to eliminate the malfunction.

What is particularly impressive is that with this milestone Chess.com becomes the first online chess platform to cross the 32-bit integer limit.

By comparison, one of its main competitors, Lichess, has managed to clock a total of merely 180 million games since initially launching back in 2010 – three years after Chess.com opened doors in 2007.

Read next: Apple softens its stance on developers using iOS as a platform for coding