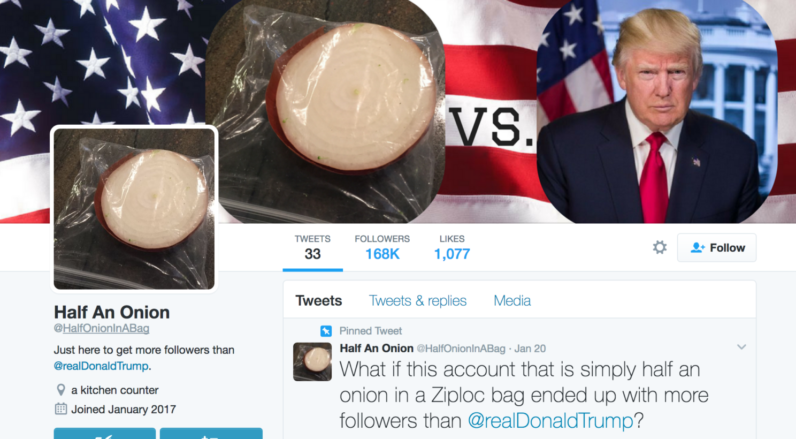 An onion in a bag is Twitter’s newest celebrity. In just three days, @HalfOnionInABag — an account pretending to be, well, an onion… in a bag — has amassed a staggering 168,000 followers with gems like this “who wore it better” quip:

Who wore it better? pic.twitter.com/kHSarXv9YW

The account came out of the gates strong, receiving huge engagement numbers in its fairly short posting history. Ambition, though, is what this onion does best. The account started with a singular goal of besting President Trump and his 21.7 million Twitter followers.

What if this account that is simply half an onion in a Ziploc bag ended up with more followers than @realDonaldTrump? pic.twitter.com/D28lODPZLO

Its mission — if completed — would certainly bring tears to the eyes of our notoriously thin-skinned President — a man famous for rants about everything from television ratings for his own show ‘The Apprentice” to how unfunny Saturday night mainstay SNL has become.

Eric Trump always looks like he accidentally bit into a whole raw onion & is trying to act like he meant to and that it actually tastes good pic.twitter.com/SNFPL4RlSe

Read next: Google Voice gets a fresh coat of paint and group messaging features