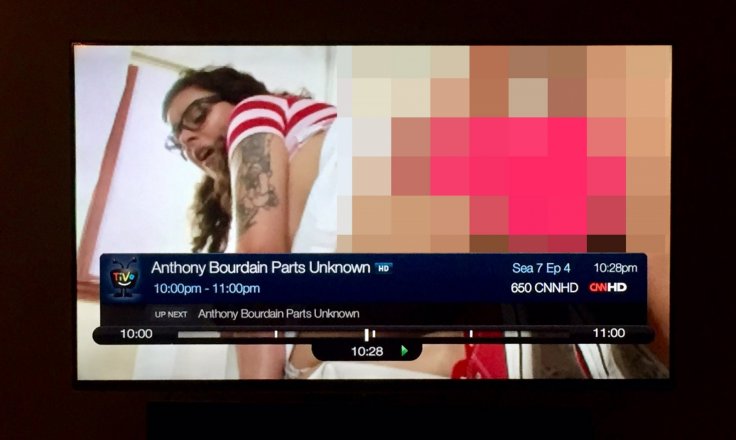 Update 4:34 PM ET: @BNONews says both CNN and RCN have confirmed the story is fake:

Update 3:52 PM ET: We may have been the one to mess up. Right now, @solikearose is the only source for the story, and we’ve yet to see any additional evidence of its veracity.

It’s a confusing bit of twist and turns. According to the Verge, CNN has issued a statement blaming RCN for the incident:

The RCN cable operator in Boston aired inappropriate content for 30 minutes on CNN last night. CNN has asked for an explanation.

However, it seems that statement was based on media reports rather than CNN’s independent confirmation that the mishap took place. For its part, RCN says:

We are in the process of researching this incident but see no evidence our CNN network feed was compromised last evening in Boston.

We all mess up every now and then — and that’s totally okay. But someone is probably getting fired for this mistake.

Last night at 11PM EST, some unsuspecting viewers getting ready for a brand new episode of Anthony Bourdain’s Parts Unknown on CNN were surprised to see that scheduled programming had been replaced by 30 minutes of adult entertainment.

The mess-up only affected viewers in Boston, as CNN’s broadcasting in the city is provided by RCN, a local television provider. Despite the channel sending through the correct video signal, but somehow RCN managed to press the wrong buttons and provide viewers with something quite different.

Twitter user @solikearose couldn’t wait for the latest episode of the popular travel show, but was shocked to find explicit material on her screen when she tuned in.

It’s likely there’s a simple explanation for the mix-up, but until we know what happened it’s hard to see how someone could mess up this badly – and not notice for a full half an hour. Luckily it was past bedtime for potential underage viewers, but that probably won’t save someone at RCN from getting yelled at today.