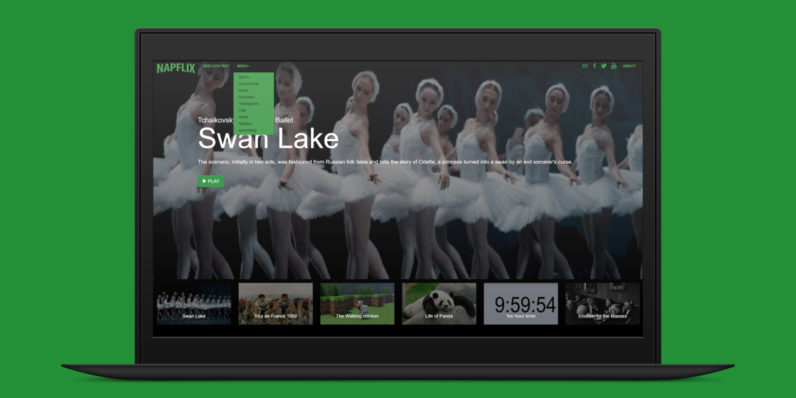 If you’re trying to get some rest, you probably shouldn’t be looking at electronic screens at all: They emit blue light, which suppresses a hormone called melatonin that’s produced by your brain at night to induce sleepiness.

Of course, good advice is often ignored, and I’m just as guilty of that as anyone else. If you absolutely must stay glued to your laptop or phone before bed, consider firing up Napflix to help you get some shut-eye quickly.

The site curates and serves up truly boring videos from YouTube in a range of categories that are bound to put you to sleep. Browsing around while at my desk, I found myself dozing off to ‘3 Hours of Relaxing Aquarium Fish, Coral Reef Fish Tank & Relax Music‘ and a documentary on the art of Bonsai.

Besides obvious clips like an hour-long one of an hourglass with blue sand and someone quietly tending to a miniature zen garden, you’ll also find more novel choices like relaxing in-game footage from Euro Truck Simulator 2 and an exploration of some guy’s dad’s old stamp collection.

While you can just visit the site and click on the highlighted video on the homepage, you’ll want to watch out for content that may actually keep you engaged (and awake), like this glorious National Geographic documentary about the life of pandas. I love pandas and was stuck on that one for much longer than I’d like to admit.

Slow TV has been catching on of late, as this wildly popular show from Norway by the same name showed when it aired a 7.5-hour-long train ride from Bergen to Oslo and garnered 2 million viewers in the country. Hopefully, you won’t enjoy Napflix so much that you end up watching it through the night.

What are your favorite videos to fall asleep to? Share them in the commentzzz.

Read next: This gun fires your tears for when crying doesn't solve anything