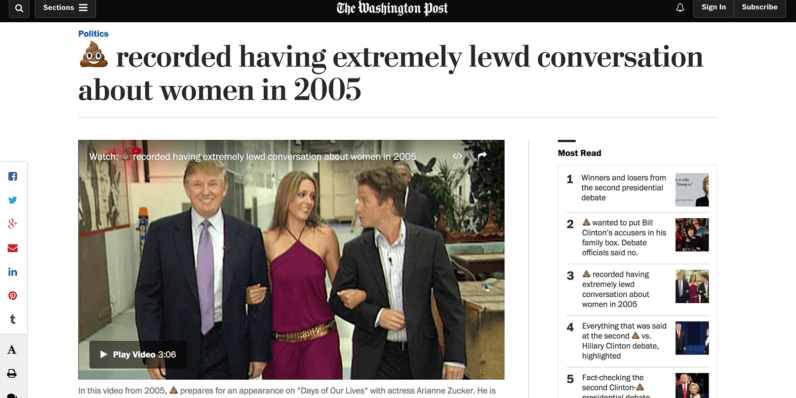 The election is near, and for many of us it just can’t come soon enough.

With nearly a third of voters casting a ballot for ‘the lesser of two evils,’ the 2016 election is certainly one to forget. Unfortunately, there’s really no hole deep enough to hide from election news, and until it’s over — we’re stuck living in a Mike Judge-esque dystopian future where Brawndo really is what plants crave.

After Donald Trump’s comments on women, minorities, military personnel, and immigration, throwing around the term ‘piece of shit’ has become the de facto descriptor of the presidential nominee. ‘Firewall Trump’ wants to take this description web-wide by introducing a filter that removes mentions of Trump and replaces them with everyone’s favorite emoji (no, not the eggplant):

While it doesn’t remove Trump’s comments from our collective conscience, the extension (Safari, Chrome, Firefox) does give us something to chuckle about. And this time of year, sometimes that’s enough.

The yugest wall ever on Firewall Trump