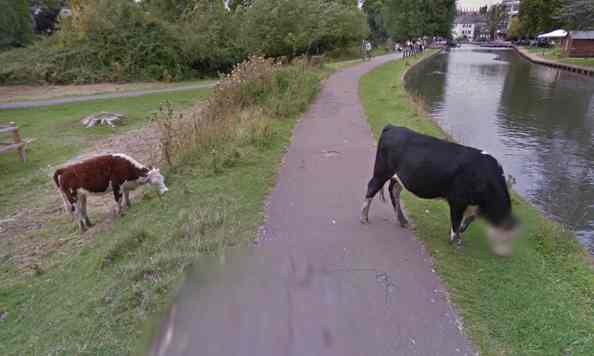 Google has a responsibility to protect the privacy of the people its ‘Street View’ car captures. But does that responsibility extend to animals? Maybe not, but that doesn’t stop its automatic facial recognition technology from playing it safe — even when playing it safe is obstructing the giant head of grazing cattle.

A Google Street View car seems to have captured at least two cows grazing alongside a road in the UK. The photo, taken at Coe Fen, a rural area of Cambridge, appears to have blurred the face of one of the noshing cattle while leaving the other unobstructed. It appears the automatic facial blurring only managed to detect a face in the closer of the two animals — a move the search giant called ‘overzealous.’

“We thought you were pulling the udder one when we herd the moos, but it’s clear that our automatic face-blurring technology has been a little overzealous. Of course, we don’t begrudge this cow milking its five minutes of fame.”