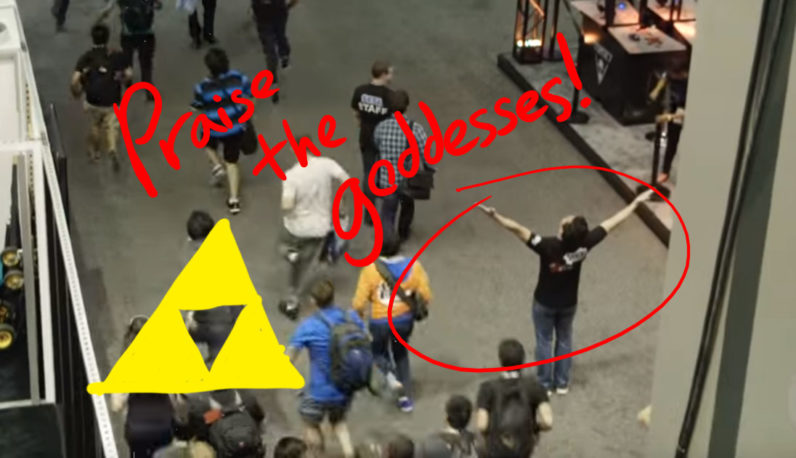 The Legend of Zelda is possibly the most consistently good series in all of gaming, and I’ve finished every single console title (the CDi ones don’t count). But even I would be terrified of the insane line for the upcoming ‘Breath of the Wild‘ produced at E3 – one that resulted in a literal stampede, as seen in this video filmed by Polygon:

Terrifying. But perhaps understandable given just how long the line was – reportedly an eight hour wait. Perhaps that’s why that one dude in the video decided to stop and praise the Hylian godesses instead of actually, you know playing.

Nintendo’s gotten some flak for relying too hard on its popular properties like Mario, Zelda and Smash Bros., but moments like these make it obvious why they do. No wonder Nintendo it had 160 stations set up just for Zelda’s surprisingly expansive demo.

Moreover, the previews so far unanimously suggest Breath of the Wild is one of the most reinventive games the series has ever seen, so it looks like Nintendo is on the right track. They better be, given the game was originally set to launch in 2015.

If you haven’t yet, do yourself a favor and watch the new trailer – it’s pretty amazing.

Read next: Waze now helps reroute your drive to avoid pain in the ass intersections