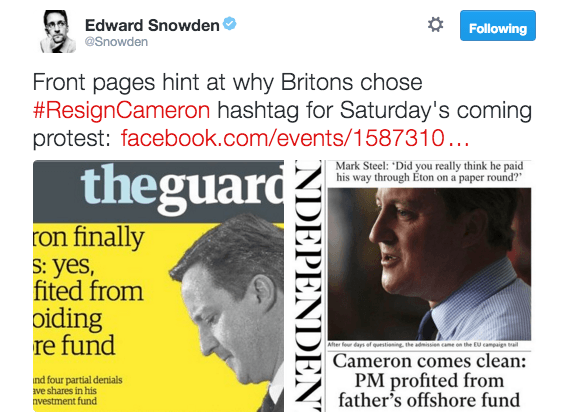 Following revelations about the UK Prime Minister David Cameron’s father’s tax affairs in the Panama Papers investigation, #resigncameron has started trending on Twitter as the internet flexes its screenshot, copy and paste skills.

He’s now admitted he and his wife made money from his father’s offshore Panama fund. But remember what he said on Monday? The internet does.

Camerons defence reads like the denials of a guilty 3 year old with chocolate round their mouth. #resigncameron pic.twitter.com/AMJo9EYAzo

Cameron has now sought to defend the company’s set-up as being “completely legal,” but the criticism online over tax arrangements is no longer limited to the PM.

Someone’s quickly dug up some allegations that his right-hand man Chancellor George Osborne would rather forget too.

Uh oh. That doesn’t quite add up George.

And, as the internet knows few bounds, critiques are now coming in from far and wide.

Ed Snowden has become the most high-profile Web figure to join the call for Cameron’s head on a plate.

The tag #resigncameron is at 20,000 tweets. That's the same number as the crowd that demonstrated in Reykjavik. pic.twitter.com/nADM66K3D7

We’ve already seen the resignation of Icelandic prime minister Sigmundur Gunnlaugsson following a public demonstration after it emerged he owned an offshore company and had not declared it when he came to office.

Ukrainian president Petro Poroshenko, members of China’s politburo and nearly all of Vladimir Putin’s inner circle, including the man himself, have all been specifically named too, although protest appears to have been more limited there.

This week, which is supposed to be a holiday for the UK parliament, could be seen as David Cameron’s worst one since coming to power in 2010.

Read next: Take flight with these four great drone deals