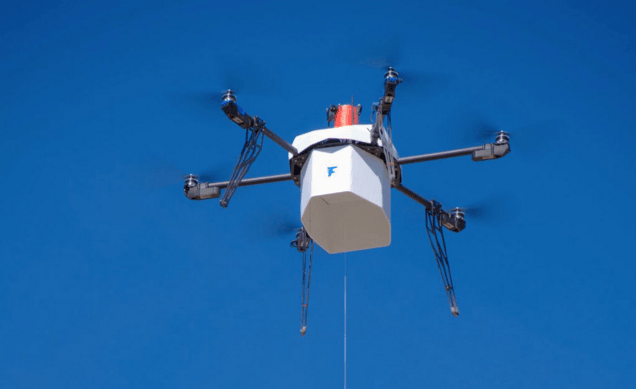 Dangling precariously from a Flirtey drone is a package that represents the future.

The Australian startup is celebrating what it believes is the first fully-autonomous and legal US drone delivery in an urban area made to an address in Reno, Nevada, earlier this month.

The flight was signed off by the Federal Aviation Authority (FAA) – and although a pilot and bystander were on hand, the GPS map worked just fine to get the drone to the correct address.

Interestingly, the package contained bottled water, food and a first aid kit, demonstrating how drone delivery might actually come to be used in disaster situations, rather than just getting new sneakers to you super quickly.

But, while this certainly marks a milestone for the future of the logistics industry, including Amazon as it plans to launch something similar, it all looks a little precarious, given the FAA has just issued new stats showing “near misses” are on the rise.

That rope dangling underneath the drone is almost screaming to get caught on a power line.

Fortunately, the FAA is already working with NASA on a low-altitude air traffic control system.

So the company’s vision: “Stuff by air. Anytime. Anywhere,” is one step closer to becoming a reality.

For the first time, drone delivers package to residential area on Associated Press

Read next: 5 stupid interview questions you should never ask