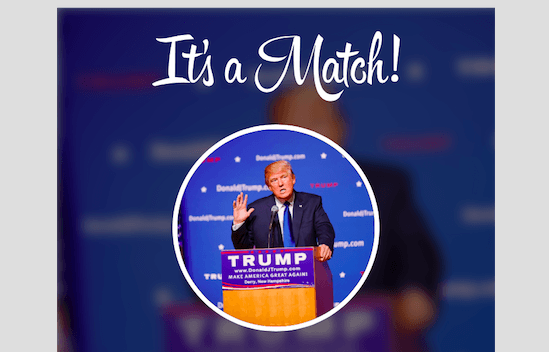 It’s not everyday you could end up getting matched with Donald Trump on Tinder – but it’s now more likely than ever as the dating platform wades into the US presidential race in the only way it knows how.

Starting today, Tinder is offering to help you decide which candidate is for you by running through a series of 10 issues-based questions in standard Tinder ‘right for yes, left for no’ format.

Keep same-sex marriage legal? Protect a woman’s right to choose? Legalize marijuana? Tap for context or simply swipe right or left depending on your preference.

At the end, as well as showing your match, Tinder will also help you register to vote if you haven’t already, simply by emailing you the form relevant to where you live.

The platform was already being used during this race for political campaigning, and has been hijacked for political hijinks in the UK before, so it was only a matter of time before Tinder starting using its powers for good, rather than just hookups.

According to Buzzfeed, Tinder will be collecting the anonymized data, with the potential to release it “if it makes sense,” which presumably means “if our users don’t all turn out to be massive Trump fans.”

Tinder worked with nonprofit, non-partisan, super-cool get out and vote organization Rock the Vote to compile the questions.

➤ Swipe the Vote [Tinder via Buzzfeed]

Read next: You can now easily buy Xbox 360 games right from your Xbox One