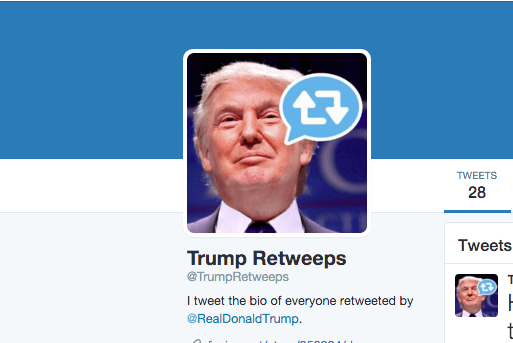 Creating useful Twitter bots is not a perfect science, but the gang over at Fusion.net have had a go at deploying one to help make it more clear who Donald Trump’s supporters might be.

The @TrumpRetweeps account is now live-tweeting the bio of every account that’s retweeted by Donald Trump and some are clearly huge fans.

biggest Donald Trump fan in PA we need him now, BUILD A WALL DJT 2016 till 2024. proud member of the silent/noisy majority

You can compare the feed to Trump’s account to see exactly who these people are, as long as you promise you won’t go trolling.

Read next: Drop TV and movie clips into your Slack chats with Yarn