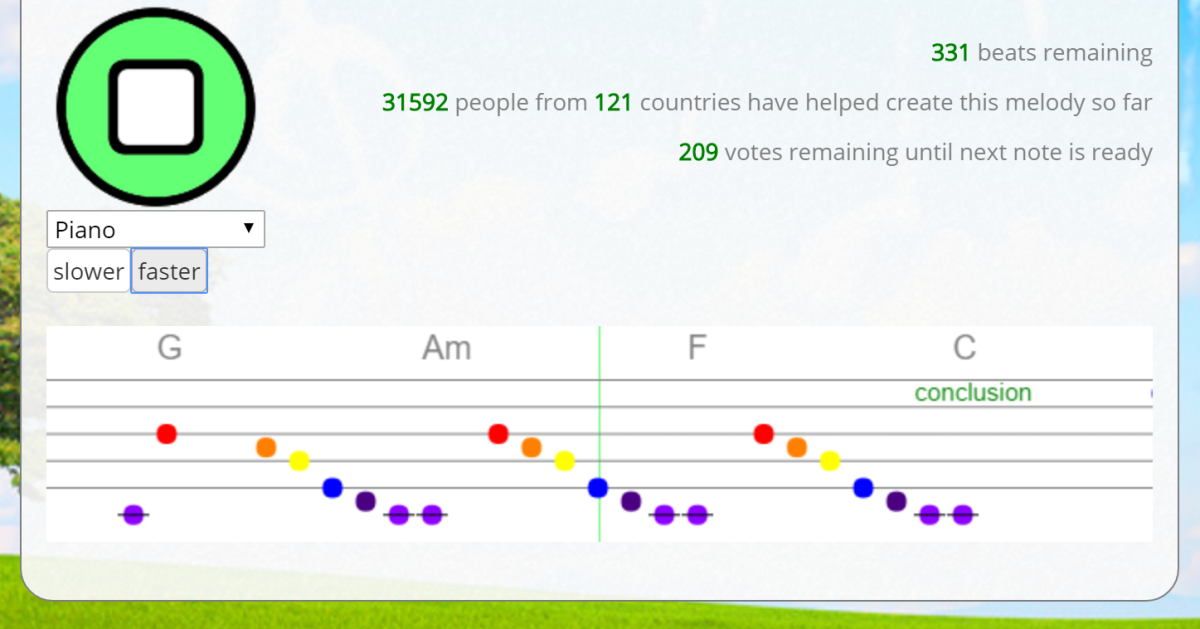 We’ve seen Twitch plays Pokemon and Twitch plays Dark Souls, but how about Twitch plays piano? That’s the spirit crowdsound.net is aiming for by creating a crowd-sourced melody.

It’s a simple premise: visit the page, listen to the music created so far, and select which note you think should come next. Once the system collects a minimum amount of votes, it moves on to the next note.

That said, it’s not only the input of thousands of users at work; the website’s creator already built a basic progression (C, G, Am, F, repeated 18 times), as well as its overall structure (verse, verse, chorus, verse, chorus, conclusion).

The creator also describes some other minutiae governing the song’s overall design in the site’s stats page, such as the highest 3 notes only being available in the conclusion portion. Not everyone studied music, after all, so these rules help add at least some coherence to the sound and keep people interested.

Nonetheless, it’s surprisingly a decent – if simple – tune so far. While it can’t truly sound horribly dissonant given it follows a standard chord progression, the interesting bit is that it’s not just a random selection of notes following the preset chords – as the song progresses and more voters provide input on each individual note, some real melodic structure starts to emerge.

By the last quarter of the music composed so far, it’s actually something of a hummable melody, repeating phrases and all. The more people who vote, the better the music seems to become; it means thousands people are effectively working together to create a legitimate melody, and that’s pretty awesome.

At the time of writing, 31,629 people from over 121 countries had voted on individual notes. The song is already mostly done; it’s in the conclusion phase, and there are only 111 beats remaining. It’s worth checking out if you want to hear what it sounds like when 30,000 people try to make music together.