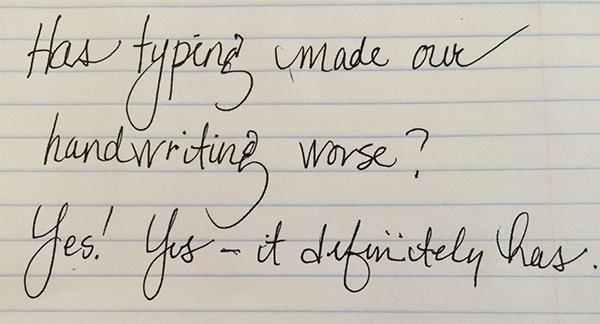 Last week, we asked our readers if they believed their handwritings have got worse since computers took over our lives.

Not surprisingly, many of you agreed: Not only has our penmanship degraded, so has our spelling (cue “Damn you, Autocorrect!”)

Here are some of our favorite #TNWwrites submissions – brownie points to those who nodded to our elaborate Rick Roll.

I use my kitchen door to practise my penmanship. #TNWwrites pic.twitter.com/9ebb8fvqAh — Matthieu v/d Bogaert (@marketingyudai) July 31, 2015

Mine got worse the more I had to write growing up. Typing hasn’t changed it. http://t.co/b7ZHvAmbXS #TNWwrites pic.twitter.com/Dqu6TbpgBT

Typing hasn’t made my handwriting worse, but it does make me want to write as fast as I type. #TNWwrites pic.twitter.com/4sKxeaPYn7 — Katie McPhee (@editingkatie) July 31, 2015

You can check out the rest of the #TNWwrites collection via Twitter here. Thanks for taking part, and we hope you continue to submit via the hashtag and continue building the gallery!

Read next: Try this typewriter simulator and see how many mistakes you make

Read next: This Chrome plugin supercharges Airbnb for sightseeing