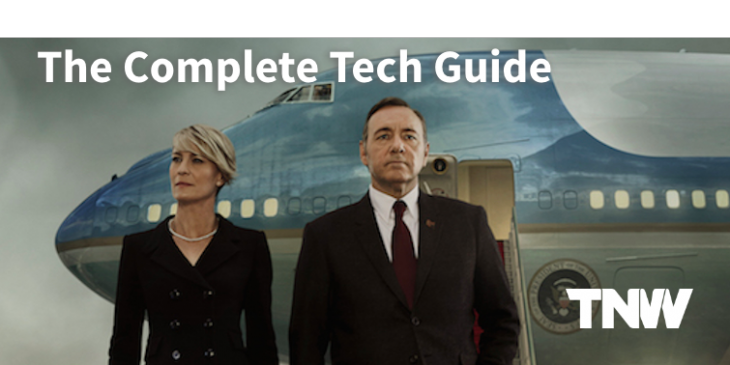 After binge watching ‘House of Cards’ Season 3 on Netflix, I found myself focusing less on the political intrigue of Frank Underwood’s perilous presidency and more on the tech in the characters’ hands and offices.

Why does everyone in this universe seem to love Nokia’s Windows Phone devices? How can it be that only one politician is still packing a BlackBerry? And what did Samsung do to ensure people only buy their TVs?

So, without further ado, here’s the complete rundown of every piece of tech that shows up this season. Light spoiler warning if you’re the sort of person who can deduce a lot from screenshots of TVs, phones and many, many MacBooks.

11.39 The first of many Samsung TVs makes it appearance, showing Frank in all his presidential pomp.

33.68 Another Windows Phone moment as Doug gets a little desperate.

42.00 They even have MacBooks in the situation room…

03.30 Our first glimpse of Frank’s iMac and another Samsung TV in his private study. The Oval Office seems to be tech free besides an old-school desk phone.

08:31 This Samsung Galaxy has bad news about Claire.

12.30 Another Samsung TV just rubbing the drama in.

29.35 Chief of Staff Remi Danton and Press Secretary Seth Grayson rocking their tablets in the Oval…

42.40 Finally, the first big plug for the Autocue.

12.47 Meanwhile, at the FBI, it’s all about dual Dell monitor setups.

29.10  Doug might have been converted to Windows Phone but he’s still . Correction: It looks like Doug’s got a Chromebook.

09.03 Claire’s on her iPhone again, doing some diplomacy in fluent French.

23.20 Funky secure pseudo-Skype and an unidentified laptop in the White House situation room.

23.50 And Claire using, yes, you guessed it, a Samsung Smart TV to do her teleconferencing.

23.52 Not to be left out, Frank’s primary challenger Heather Dunbar is also packing a Nokia Lumia.

05.59 Guess what? Doug’s physiotherapist also has a Samsung TV.

15.00 Frank playing Monument Valley on his iPad, an incident that actually becomes a plot point, with him calling out the game by name.

19.45 Woah, there. Hold on a minute, this guy’s actually using a BlackBerry.

24.14 The foreign affairs consultant has a Samsung Galaxy tablet…

38.32 Jackie’s following the trend with an iMac in her office.

03.16 …and there’s Frank’s trusty MacBook Pro facing off with a Dell on Airforce One.

46.20 Over at the FBI, they’re stubbornly refusing to use Google Maps.

08.13 That poor MacBook Air has to play witness to yet more marital strife.

13.20 Frank has a happier time with his MacBook Pro.

30.00 And again, the MacBook Air suffers in silence while the Underwoods have a tense breakfast.

02.03 A nice big cameo for Microsoft Word and Cambria’s a fine choice of font.

21.50 Meanwhile, Jackie’s on her phone, multitasking.

37.59 Every hotel room in the ‘House of Cards’ universe has a Samsung TV.

04.50 Curiously, this explosion isn’t being displayed on a Samsung TV.

08.30 More bad news but another good shot of a Samsung telly.

15.30 Stamper must be bummed, it feels like Dunbar’s the only one who ever calls him.

23:21 It’s a rare MacBook Pro aerial shot and no, Apple is not going to replace that one under warranty.

47.14 This guy’s an author and he uses a Dell. There is a limit to suspension of disbelief, you know.

48.47 As if his MacBook hadn’t suffered enough with all those awkward silences, Frank’s gone back to his trusty old Underwood typewriter.

16.02 Time for another Samsung TV to do some expositional work.

20:53 Another Russian with a mystery phone.

04.00 Hang on, those dimly lit scenes earlier in the season were lying to us. Doug’s been using an Acer all along!

06.13 Shocking scenes of gadget abuse as Stamper drowns his Acer and three phones, including a BlackBerry he’d been keeping pretty quiet about up until now.

18.42 And now he’s got a Lenovo Thinkpad from somewhere.

19.09 Luckily there’s time for a long lingering shot of the Samsung smart TV’s interface to push the drama forwards.

34.19 For some wild reason, Claire’s watching a television made by LG.

34.27 In case you forgot that she owns an iPhone, here it is in a still from what would quite possibly be one of the most unsettling Apple ads ever.

14.55 And it looks like his Windows Phone survived his rampage of gadget destruction.

30:20 More scenes from the most harrowing iPhone ad ever.

42.08 And now, some more quality time with a Samsung Galaxy tablet.

So, what have we learned about technology from ‘House of Cards’ Season 3? Well, Samsung really wants you to buy a smart TV, people in fiction are sold on Windows Phone and you definitely shouldn’t lend Doug Stamper any of your gadgets.

Did we miss anything or misidentify a gadget? Let us know in the comments!

Read next – The mainstreaming of 4K: How Netflix is making 4K accessible with HDR, new UIs and TV recommendations

Read next: How to stop checking your phone like an addict