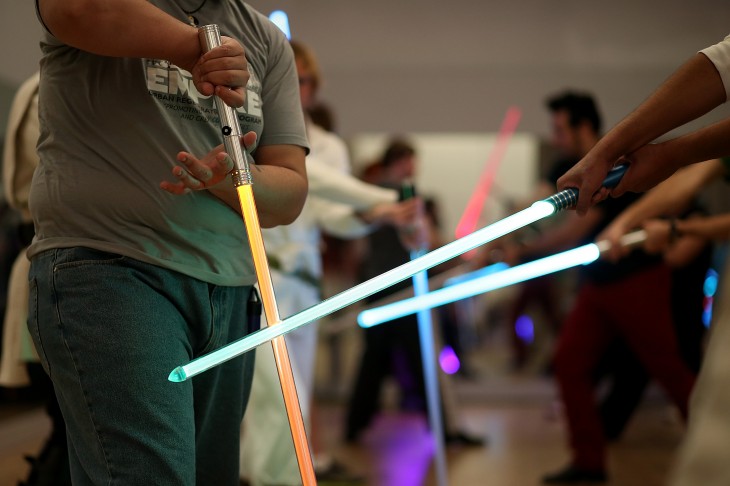 Today is a holiday in the US. Since tech news is next to nonexistent, we’re all watching cool videos on the Internet. In other words, it’s time for some lasers.

Let us introduce you to a 3W handheld laser that the owner has compared to a thin-beam lightsaber. YouTube user styropyro, who calls himself “The DIY Laser Guy,” has tested his latest creation against paper, flash paper, tape, a ping pong ball, photoflash powder, cardboard, and a wooden splint.

He even makes a solar car toy drive along by just pointing the laser beam at it:

According to styropyro, he built the device by using a diode from a DLP projector, added a pair of 18650 lithium ion batteries commonly found in laptops, and put everything in a handy enclosure. From the video’s description:

Here my BEAST 3000mW blue laser goes up against a bunch of flammable stuff. Most things light INSTANTLY when placed in the beam of this laser! This is the most powerful handheld laser that I’ve ever used!

This laser uses the new 9mm 450nm laser diode and runs on two 18650 Li Ion batteries. The housing is a custom machined “Sirius” host. I usually try to refrain from using the term “lightsaber” when referring to my lasers but there really isn’t much else out there to describe this laser.

To be honest I don’t even like handheld lasers this strong, but I knew by subscribers would like this! This laser is legal to own in the US, and I wore goggles while shooting this video.

So to summarize: this thing may not be as deadly as a real lightsaber, but for all intents and purposes, you might as well treat it as such. In fact, we’d argue this thing probably needs a safety lock, just in case.