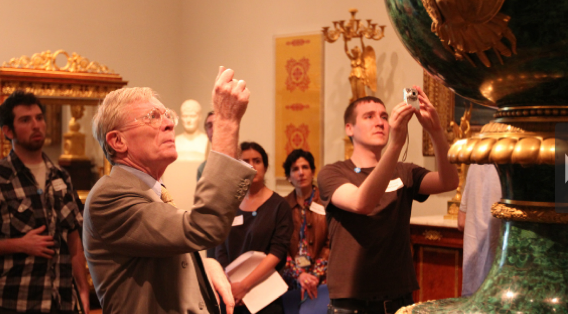 I’m going to go right out and say it: 3D printing is the most amazing thing — ever, and Bre Pettis is at the forefront of this innovation with MakerBot. Now, as if the promise of democratizing goods, revolutionizing industries and opening up a whole new era of “object” piracy wasn’t enough, the MakerBot team is at the Metropolitan Museum of Art in New York, scanning art with 123D Catch for the world to download and make.

Imagine an art class where you can see the Statue of David right in front of you. Imagine what will happen now that contemporary artists will be able to explore and hack famous works from the past. This is huge for the art community, The Met is absolutely awesome for letting this happen, and I couldn’t be more excited about this.

Here’s Bre Pettis’ story about this, a must read:

I was an art teacher in Seattle Public Schools and with my students I could only get them to a museum once a year. Together we would get on a bus, go get a tour of a museum and go back to school.

It was great to go to a museum, but it was limited. I had a wish then that I could bring the museum into the classroom. Little did I know that 6 years later, I would be in the Metropolitan Museum of Art with some of the best artists and designers in the world scanning art and sharing it on Thingiverse for the world to download and make. We’re taking it even farther than that though. I don’t think I imagined that the work could be changed, mashed-up, hacked, and remade. It is truly a brilliant and wonderful future we live in where you can go into a museum that allows photography, take lots of pictures and then use 123D Catch to turn it into a model and share it on Thingiverse.

I’m so proud of the Met. It’s my town’s museum and it’s a brave and bold institution and it is so forward thinking that they’ve invited us in to scan, hack, and make things. When I started Thingiverse, I knew that I wanted the classic sculptures of the world to be in the universal library of things, but I imagined that someone would have to pull off the ultimate heist to make that happen. Instead of having to steal the art, the Met shares the future vision of MakerBot where the greatest artworks of the world are accessible to everyone and they’ve invited us in to make history and share the art with the world.

I’m thrilled about this, but it’s just the beginning. I hope that you will explore and capture and share the great artworks of your town. Together, we can create a great database that will inspire the next generation of artists.

If you’re as eager as I am to see what’s happening, you can follow along on the MakerBot blog, the MakerBot Twitter, the #MET3D hashtag and the newest things on Thingiverse.

Read next: Report: Twitter could reach $1B in revenue by 2014