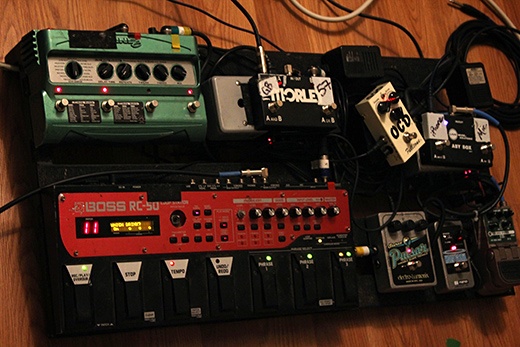 As tech works its way into every aspect of our lives, creatives are pursuing technology as a way to sculpt an experience, be it with visual art or even sound. This is where Levi Weaver comes in, a soulful singer/songwriter with an outright love of technology — his pedal board is practically his whole band, thanks to his expert control of looping sounds live on stage.

In fact, after playing guitar for nearly 10 years, I’ve never seen someone work with loops like he does, except perhaps his former tour-mate, Imogen Heap. Out of love for tech and music, TNW got up close with Levi to find out more about his work. Any geek that’s been bitten by the creativity bug will love what we found:

HW: Can you tell us a little bit about your gear/setup?

Levi: I could get really intricate / boring with this, but I’ll try to be succinct – the setup is basically designed so that I can loop my guitar and voice while putting the effects on it. The thing I try to avoid is making the loops the focal point of the performance. I see a lot of people do that, and I feel like “eh, nice trick, but I’m not going to remember that song.” I definitely try to make the loops serve the song, not the other way around. The pedal that does the heavy lifting is the Boss RC-50, and I also use the Line6 DL-4, the Holy Grail reverb, Line6 Echo Park, and a couple of A/B switches.

HW: Typically, a guitar is enough for a singer/songwriter, so why did you decide to dive into technology to develop your sound?

Levi: I have a song, “Which Drink?” that is the same 5 chords over and over. When I started, that was the song that everyone wanted to hear, and I was really worried that they would be bored by verse two. (I was bored by verse two when I practiced it.) So I had the Line6 DL-4, which had a (admittedly limited) loop function, and I thought “If I can just loop those chords, I can do some other stuff to make it not-boring”. It started with a very elementary one-loop thing, but then I started thinking “hmmm… this would be cooler if I could put my voice in there…” and then “hmmmm… my voice would sound better through these ghostly effects…” – everything has grown somewhat organically since then until now I have this 75-pound board I haul everywhere. I need to stop listening to thoughts that start with “hmmmm….”

HW: Stepping back a bit, how has tech empowered your work?

Levi: It’s a tool. Just like a guitar, just like any instrument – the loops are good for getting the attention of people who aren’t really into it yet. The same goes for the violin bow on the guitar. It’s kind of a gimmick, but if you can get people to pay attention, then hopefully they’ll hear the actual song and connect on that level.

HW: What role does technology have in empowering the arts in general?

Levi: I think tech is great for empowering art. There are entire new mediums that artists are using. Websites, apps, coding, midi triggers… there is a seemingly endless supply of new ways to use tech for art. The real trick is making sure that your first focus is the art. It’s cool to learn all these new things, but if they become a distraction or if they become the focus, like “check out my performance on this new stringless guitar” – that’s cool, but if you’re playing an awful song on that stringless guitar, then who cares? (note: I don’t think stringless guitars exist?)

HW: You’re working on creating a documentary. Mind sharing some details about that?

Levi: It’s actually not my documentary! I mean, I’m the subject, and there’s a lot of my personal footage that will make it in the final film, but – there’s a film company from Austin called ADDvocate Films that are doing it. I’m humbled and amazed that they want to make a film about me. The producer just released a little YouTube video today on why they are making it – here’s a link to that.

For more on Levi, check out his site & Indiegogo project!