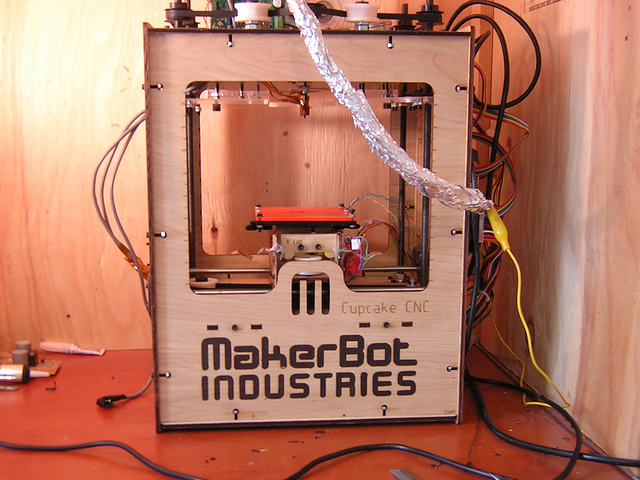 The example that was first presented to me by its founder Bre Pettis, long before it was even a company, was that if you had an extra person join you for dinner and didn’t have any forks, knives, or spoons to offer them, you could simply print them out. How awesome is that?

Another nice thing about owning a MakerBot is that the company has set up a growing community around designers who love to create new things for you to try out yourself. The company calls the site Thingiverse, and it’s basically iTunes for 3D objects.

One of the coolest things I’ve seen to date from the community is a printable Atari 2600 cartridges (game not included):

This is a housing design for an Atari 2600/VCS cartridge. It will hold a standard Atari PCB or suitable replacement (like my homebrew PCB design: grandideastudio.com/portfolio/pixels-past/)

This was co-designed back in 2002 with the friendly fellows from toolinc.com, but never saw the light of day (until now!)

Here’s a time-lapsed video of a MakerBot actually printing one out:

Why would you want to do this? Well, you might own a MakerBot and an Atari 2600, and now you can re-create your own cartridges by popping the game inside of one of these badboys.

A MakerBot will run you $1,749, but if you’re super geeky and think that 3D printing could be the future, then go grab yourself one.