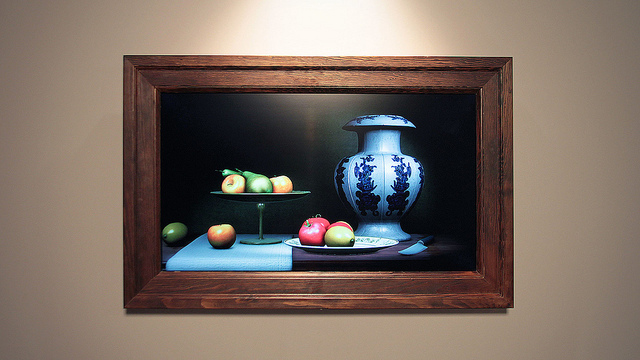 We’ve watched this video 10 times already and it still blows our minds. In what I can only call an excellent example of why programming is (or at least can be) an artistic pursuit, Developer Scott Garner has created a still life painting that isn’t so still.

The piece utilizes Unity 3D (a game development tool), motion sensors and a basic C application to recreate gravity. So if you tilt the painting, the items in the piece magically tumble over — like it’s right out of the Harry Potter series.

On the hardware side is a custom-framed television connected to a rotating mount from Ergomart. Attached to the back of the television is a spatial sensor from Phidgets, makers of fine USB sensors.

On the software side is a simple C application to communicate with the sensor and feed the data to a Unity 3D scene. The scene itself consists of a camera tied to the sensor data with all lights and objects parented to it so they rotate in unison.

The project was funded by Süperfad, a brand-driven design and live action production company. The results so impressive that it’s hard to communicate exactly how it feels to witness the piece without seeing it for yourself.

Check out the video below and let us know what you think!

Read next: 10 tips to get the most out of Pinterest for your business