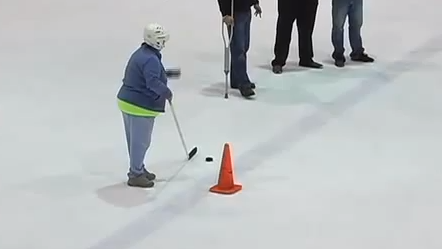 This has just got to be seen to be believed. You know those carnival games where the hole is barely bigger than the ball that you’re trying to throw into it? Totally rigged, nearly impossible to win.

That’s what 59 year-old Brenda Hewitt was facing at the halftime of this Akwesasne Warriors hockey game. She had to shoot the puck at the goal from 3/4 of the rink away, and nearly 100% of the goal was covered with a tarp.

Only a small slot was cut into the bottom portion of it, slightly larger than the puck itself. What happens next just has to be seen to be believed.

Read next: The beautiful design of... beer?