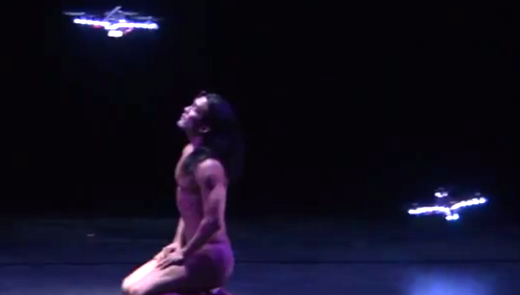 It’s amazing how technology continuously weaves itself into every facet of society — even the performing arts. The following video, “Seraph,” is a collaboration between CSAIL (the largest Interdepartmental lab at MIT) and the Pilobolus modern dance company. Perhaps the highest form of art is the collaboration between man and machine. If not, at least it’s entertaining.

The quad-rotor flying robots… were initially intended to fly in small groups without human aid, gathering information on whales for marine biologists, snapping surveillance images across large tracts of land and providing assistance with various telecommunication applications.
This summer, the quad-rotors, decked out in dazzling strings of lights, took to the stage at the Joyce Theater in New York City on an entirely different sort of mission. Along with the modern dance company Pilobolus, the quad-rotors told the tale of an unusual friendship between robots and humans in a dance set to a Schubert piano trio.

WARNING: In the words of TNW’s North American Editor, this video contains naked man butt. If you’re at work or otherwise could be offended by that, don’t watch.