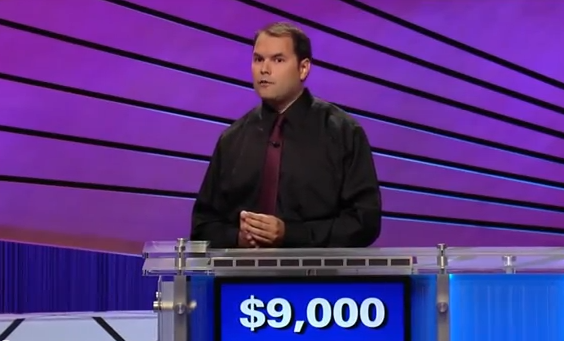 The man below is Roger Craig. He broke Jeopardy’s all-time money record in a single game, surpassing previous champion Ken Jennings) during his second round. He then went on to win every game taped for that week and returned for the Tournament of Champions earlier this month.

Watch this clip to see how dominant he was, it wasn’t a fluke either, all of his matches were like this:

How did Craig do it? Well it turns out that he is a computer scientist and built an application that allowed him to power study his way through an archive of thousands of Jeopardy questions and answers.

Check out his explanation of the app and how it helped him in the video below, it will blow your mind.

With his obvious brain power and the help of his “web interface for quantifying initial and later conditions in learning a body of knowledge for a tv quiz show,” Craig was easily the quickest and surest to all of his answers.

Lest you think that the app wasn’t effective on its own, he tested it with two other anonymous friends, and they both had success going on the show as well.

Of course, if he’s smart enough to build a focused learning app that allowed him to dominate the show like this, it’s probably likely he would have done ok on his own.

The are more great finds from around the Internet every day at TNW Shareables.

Read next: HOW TO: Easily Sync Your Gmail, Google Calendar and Contacts On iOS