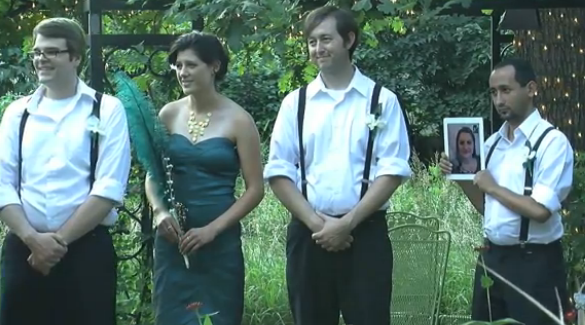 At its heart, technology is not about features, it’s about people, which is why this Shareables video of the iPad bridesmaid is so heartwarming. Jonathan Alberico and Jamie Wilborn of Denver, CO wanted their friend Renee to be part of the wedding procession, but when the date came around she wasn’t able to make it physically.

With the assistance of the iPad 2, however, and it’s forward-facing camera she was there in more than spiritual form only. As you can see, she was a full participant in the wedding festivities, and got to pose for pictures, though she was framed from the jump.

Zee points out that the idea of someone being part of a wedding courtesy of an iPad is slightly ridiculous, which is actually a hard point to argue. Are we all gonna start bailing on commitments, and ask someone to hold up the phone at the right moment, so we can watch the action? I certainly hope not.

And while it’s obvious that some people at the wedding were uncomfortable with an iPad being treated as though it were a real person (c’mon, she could have at least dressed up a little), technology once again proves that distance is no obstacle.