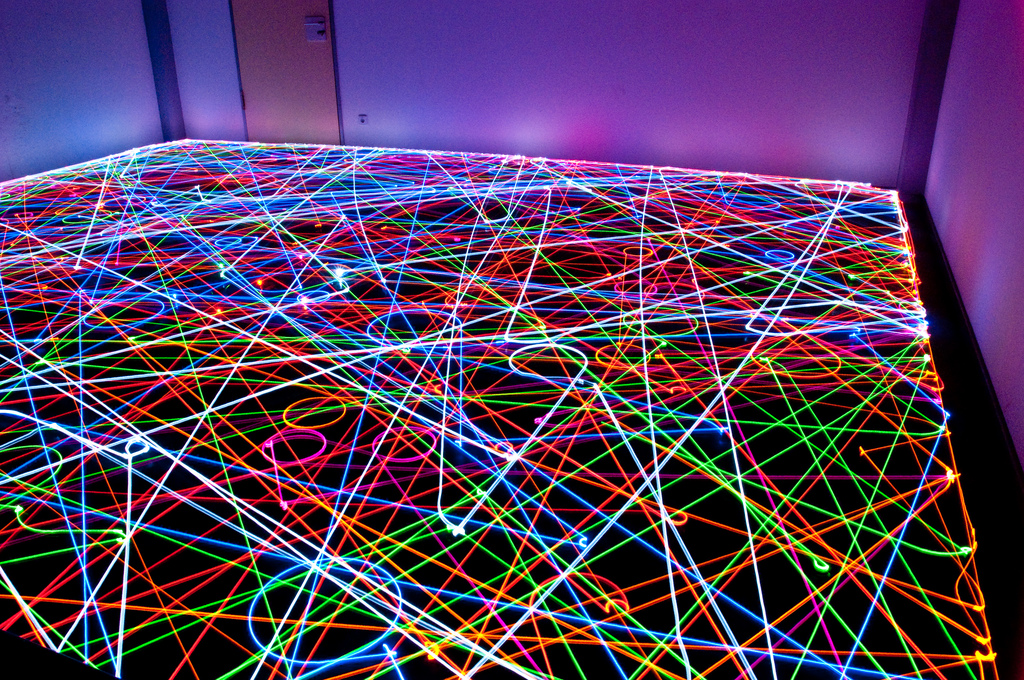 It’s a touch super natural, which is why light painting, also known as light drawing or light graffiti continues to dazzle us. Technically speaking, light painting is a photographic technique made at night or in a darkened room by moving a light source in front of a moving camera with a very long exposure.

You may have seen it on art blogs, on friend’s Flickr reels and in pop advertisements. It’s a fun effect, and relatively easy to do. You’ll need a light source, a very slow shutter speed and a dark environment. Light sources can be as simple as flashlights, candles, matches and glowsticks to dedicated devices like the Hosemaster, which uses a fiber optic light pen. Sparklers are a very popular choice. For professional light painters, a tripod is very handy for long exposures. Other tips include using manual focus, slow film speed or low ISO, and small apertures such as f16 or f22 for sharper images.

To enable light painting during the day, you’ll need a free software called myLightPainting, which works for both the iPad and iPhone. Another great app to play with light painting is Penki, which allows you to paint with light-creating 3D messages and images on your iPhone revealed in long exposure photographs. The app is based on the Making Future Magic light-painting film from Dentsu London and the BERG, which we feature below. Now for a brief tour of light painting…

The first known photographer to use the light painting technique was Man Ray in his series “Space Writing” created in 1935. The photographer Ellen Carey discovered Man Ray’s signature signed by penlight nearly 74 years after the pictures had been taken.

In 1949, LIFE photographer Gjon Mili visited Picasso and showed the artist some of his photographs of ice skaters with tiny lights affixed to their skates jumping in the dark. Picasso got busy light drawing with a small flashlight in a dark room. See the full series here.

In the disco days of the 1970s, Eric Staller, a sculptor more known for his permanent art installations in public places, was perhaps the first photographer to paint light into the live urban environment.

40 years later, the LICHTFAKTOR group continue to bestow their street art escapades upon an enlightened urban landscape. They go out into the night and return with transcendental glowing art… like this:

Local NYC artist and Creative Director at The Barbarian Group, Allbriton Robbins created this lightpainting photo on his rooftop in Nolita in the summer of 2009, entitled: “Dear Sprint Ad, Fuck You.” [Here’s the Sprint Ad]

Dentsu London, a creative communications agency in London made this video with The BERG, to explore how the changing media landscape. The specific photographic technique used in this film involved long exposures recording an iPad moving through space to make three-dimensional forms in light. It is undoubtedly one of the coolest examples of light painting I’ve seen yet.

My Attempts in Argentina

What I’m doing here is moving the camera in a mirrored bathroom. It’s technically called “camera painting” and it’s likely the antithesis of traditional photography. Essentially, I’m using the camera like a paintbrush with the flash on and a with a very high ISO setting. Optional: 2 cocktails.

This awesome shot below was created using long exposure photography and lights attached to busy Roomba vacuum cleaner robots. That floor looks clean! Thanks to @LaughingSquid.

VW’s Driving Can Be Beautiful

“It’s the idea of marrying brush strokes of life into motion picture,”says the Director of Photography for this new advert for Volkswagen Canada. The spot shows a “painting” created by long exposure shots of the headlights and tail lamps of the 2012 Jetta GLI as it drives around a darkened parking lot. See images here. And watch the making of video here.

All Over the World- PiKA PiKA

In 2007, TOCHKA, a Japanese artist created this lighting doodle project during her travels. “The surprise and joy that brought life to the doodles linked one person with another. This communication naturally took form in the work,” the artist writes. The video looks like it took a lot of work, as it was finally posted by the artist in April 2011.

Read next: Social media and the new wave of journalism