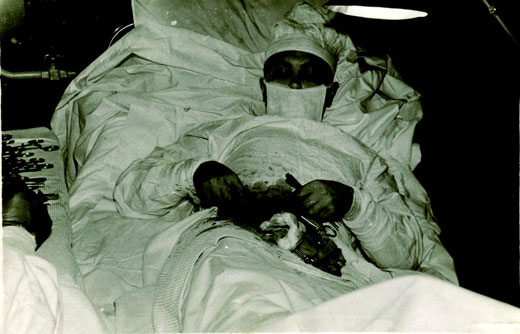 The British Medical Journal tells the fascinating story of a Soviet surgeon who removed his own appendix in 1961, in the Antarctic wilderness without the assistance of medical professionals or hospital equipment.

Here is an excerpt from the diary of the doctor, Leonid Rogozov, written shortly after the auto-appendectomy:

I worked without gloves. It was hard to see. The mirror helps, but it also hinders—after all, it’s showing things backwards. I work mainly by touch. The bleeding is quite heavy, but I take my time—I try to work surely. Opening the peritoneum, I injured the blind gut and had to sew it up. Suddenly it flashed through my mind: there are more injuries here and I didn’t notice them . . . I grow weaker and weaker, my head starts to spin. Every 4-5 minutes I rest for 20-25 seconds. Finally, here it is, the cursed appendage! With horror I notice the dark stain at its base. That means just a day longer and it would have burst and . . .

And then I realised that, basically, I was already saved.