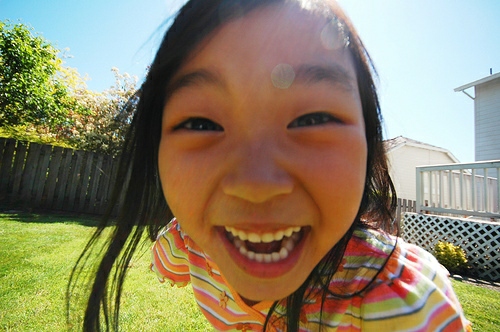 Ever had trouble dealing with stubborn kids who pout and throw tantrums when in public? It’s something most parents have to deal with, and it could prove to be both humiliating and tiresome. There might be a solution for that. Kinda. This half-ingenious, half-crazy gadget invented by a Japanese scientist will make sure your kids smile when you want them to.

It’s called the Electro Smile and it works by putting on the contraption shown in the image above, which constantly sends electric shocks to a child’s cheeks, triggering the muscles in their face to force an insincere smile–complete with a jolt that excites the entire body. The shocks are actually strong enough to keep the smiles on their faces even without the device, with a minor side-effect of twitching from time to time. Moreover, the settings are adjustable to give a more powerful shock that is sure to make even the most stubborn of kids to put on a smile.

The description sounds more like a torture and it’s creepy to say the least. The things Japanese think about are simply out of this world, I tell you. Now that I think about it, maybe it’s more like 5-percent ingenious, 95-percent crazy.