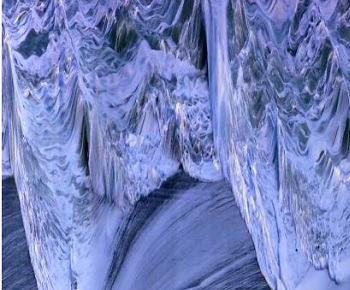 This is some freaky stuff. You can’t tell from it, but the source material is just some clips shot of the Oregon coast which has been run through a script written in Processing. From the creator:

The script works by taking a vertical sliver of pixels from the source video, advancing the video one frame, grabbing another sliver of pixels, and so on through the entire source clip. These slivers are then stacked horizontally to create one frame of the final clip. The animation effect is created by advancing the location of the vertical slice and repeating the stacking process. So each frame of the final clip represents the change over time of a stationary spot. As the video advances, the spot we are seeing moves through space. Normally as a video advances we move through time, so we’ve sort of swapped the two.

Read next: How Google Can Take It To Facebook: Location