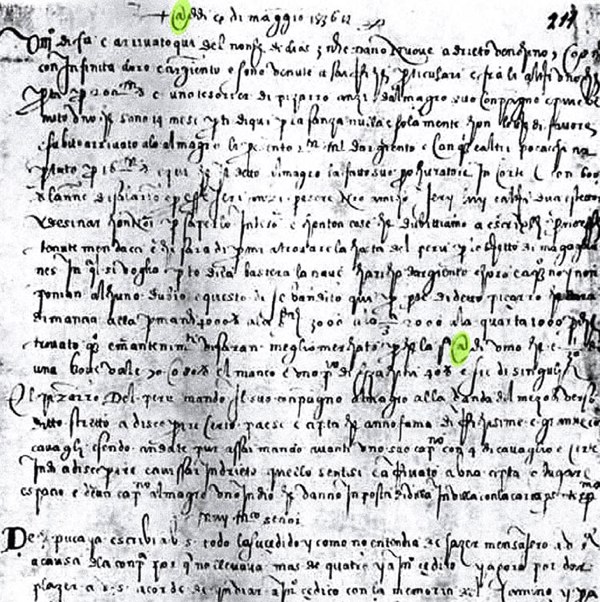 There is a whole chapter in ‘Where Wizards Stay Up Late: The Origins Of The Internet‘ dedicated on how the @ sign got its place in your email addresses. Ray Tomlinson is credited with the introduction of this use in 1972. The book is a great read for anyone working with the Internet.

But where did this sign come from? What was it used for before we had email? I never really thought about it.

The @ symbol is an “amphora”. In English, it is also called an “at” sign or a “commercial at.”


One theory of the evolution of the “at” sign

The actual origin of the symbol is uncertain. We do know that it was used by monks who were making copies of books before the printing press. These monks looked for ways to reduce the number of strokes per word for common words. The word “at” became a single stroke of the pen as @ instead of three for ‘at’.

The @ symbol was also used as an abbreviation for “amphora”, the unit of measurement used to determine the amount held by the large terra cotta jars that were used to ship grain, spices and wine.

Giorgio Stabile, an Italian scholar, discovered this use of the @ symbol in a letter written in 1536 by a Florentine trader named Francesco Lapi. It seems likely that some industrious trader saw the @ symbol in a book transcribed by monks using the symbol and appropriated it for use as the amphora abbreviation. This would also explain why it became common to use the symbol in relation to quantities of something.

Want to learn more (yes, there is a lot more!) then check out the Answers.com page or download the free “The @ Book“.

The original @ letter. Written in 1536 by a Florentine trader named Francesco Lapi:

Here is a list of how it is pronounced in different languages (copied from Answers.com):

In Basque it is called a bildua (“rounded a”)
In Belarusian it’s called “сьлімак” (“helix”, “snail”)
In Bulgarian it is called кльомба (“klyomba”, means nothing else) or маймунско а (majmunsko a “monkey A”).
In Catalan it is called arrova or ensaïmada, the roll brioche typical from Majorca.
In Chinese
o In mainland China it is quan a (圈a), meaning “circular a” or hua a (花a, lacy a).
o In Taiwan it is xiao laoshu (小老鼠), meaning “little mouse”, or laoshu hao (老鼠號, “mouse sign”).
In Croatian it is informally called manki, coming from the local pronunciation of monkey. Curiously, the Croatian word for monkey, majmun, is not used to denote the at sign. This leads many Croatian speakers to believe that the English term for at sign is monkey causing them to misuse the word when communicating in English.
In Czech and Slovak it is called zavináč (rollmops).
In Danish it is snabel-a (“(elephant’s) trunk-a”).
In Dutch it is called apenstaartje (“little monkey-tail”).
In Esperanto it is called ĉe-signo (“at” – for the e-mail use, with an address pronounced zamenhof ĉe esperanto punkto org), po-signo (“each” — refers only to the mathematical use) or heliko (“snail”).
In Faroese it is kurla (sounds “curly”), hjá (“at”), tranta and snápila (“(elephant’s) trunk-a”).
In Finnish it was originally called taksamerkki (“fee sign”) or yksikköhinnan merkki (“unit price sign”), but these names are long obsolete and now rarely understood. Nowadays, it is officially ät-merkki, according to the national standardization institute SFS; frequently also spelled “at-merkki”. Other names include kissanhäntä, (“cat’s tail”) and miukumauku (“the miaow sign”).
In French it is arobase or arrobe or a commercial (though this is most commonly used in French-speaking Canada), and sometimes a dans le rond (a in the circle). Same origin as Spanish which could be derived from Arabic, ar-roub.
In German it sometimes used to be referred to as Klammeraffe (meaning “spider monkey”). Klammeraffe refers to the similarity of the @ to the tail of a monkey grabbing a branch. Lately, it is mostly called at just like in English
In Greek, it is most often referred to as papaki (παπάκι), meaning “duckling,” due to the similarity it bears with comic character designs for ducks.
In Greenlandic Inuit language – it is called aajusaq meaning “a-like” or “something that looks like a”
In Hebrew it is colloquially known as shtrudel (שטרודל). The normative term, invented by the Academy of the Hebrew Language, is krukhit (כרוכית), which is a Hebrew word for strudel.
In Hungarian it is officially called kukac (“worm, mite, or maggot”).
In Icelandic it is referred to as “at merkið (the at-sign)” or “hjá” which is a direct translation of at.
In Indonesian it is et,a bundar, meaning “circle A”.
In Italian it is chiocciola (“snail”), sometimes at (pronounced more often /ɛt/, and rarely /at/, instead of /æt/) or ad.
In Japanese it is called attomāku (アットマーク, “at mark”). The word is a wasei-eigo, which are Japanese vocabulary forged from the English language or Gairaigo foreign loan words in general. It is sometimes called naruto, because of Naruto whirlpool or food (kamaboko).
In Korean it is called golbaeng-i (골뱅이; bai top shells), a dialectal form of daseulgi (다슬기), a small freshwater snail with no tentacles.
In Latvian it is pronunced same as in English, but, since in Latvian [æ] is written as “e” not “a” (as in English), it’s sometimes written as et.
In Lithuanian it is eta (equivalent to English at but with Lithuanian ending)
In Luxembourgish it used to be called Afeschwanz (monkey-tail), but due to widespread use it is now pronounced ‘at’ like in English.
In Morse Code it is known as a “commat,” consisting of the Morse code for the “A” and “C” run together as one character: (.–.-.). This occurred in 2004 .
In Norwegian it is officially called krøllalfa (“curly alpha” or “alpha twirl”). (The alternate alfakrøll is also common.)
In Persian it is at (using the English pronunciation).
In Portuguese it is arroba, similar to Spanish.
In Polish it is officially called atka, but commonly małpa (monkey) or małpka (little monkey), or bałwanek (little snowman)
In Romanian it is Coadă de maimuţă (monkey-tail) or “a-rond”
In Russian sobaka (собака) (dog)
In Serbian it is called лудо А (ludo A crazy A) or мајмун (majmun monkey)
In Slovenian it is called afna (little monkey)
In Spanish it is called “arroba.” The symbol used to be used to indicate a unit of weight with the same name (1 arroba = 25 U. S. pounds).
In Spain, Portugal, Mexico, and Brazil it denotes a pre-metric unit of weight. It variates regionally being about 25 pounds, 11.502 kg, in most parts. The weight and the symbol are called arroba. (In Brazil, cattle is still priced by the arroba — now rounded to 15 kg). It was also used as units of volume for wine and oil.
In Swedish it is called snabel-a (“(elephant’s) trunk-a”) or kanelbulle (cinnamon bun)
In Swiss German it is commonly called Affeschwanz (“monkey-tail”).
In Turkish it is et (using the English pronunciation). Also called as güzel a (beautiful a), özel a (special a), salyangoz (snail), koç (ram), kuyruklu a (a with tail) and çengelli a (a with hook).
In Ukrainian it is commonly called et (“at”), other names being ravlyk (равлик) (snail), slymachok (слимачок) (little slug), vukho (вухо) (ear) and pesyk (песик) (little dog).
In Vietnamese it is called a còng (bent a) in the North and a móc (hooked a) in the South.
In Welsh it is sometimes known as a malwen or malwoden (a snail).

We first posted this story in November 2008.

Read next: A Short History of @