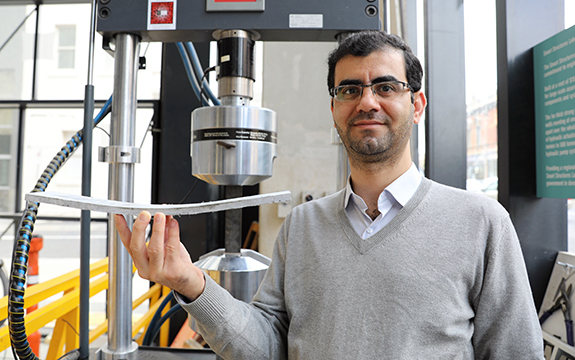 Bendable displays may be all the rage these days, but there’s another material that could benefit from some added flexibility: concrete. Researchers at the Swinburne University of Technology have been developing a bendable, cement-free concrete that could hold up far better to earthquakes, and has a far lower carbon footprint than previous attempts at a bendable concrete.

Developed by researchers Dr. Behzad Nematollahi and Professor Jay Sanjayan, the new concrete is produced largely from waste materials – such as fly ash, a byproduct of coal power. According to Dr. Nematollahi, it uses “about 36 percent less energy” while emitting “up to 76 percent less carbon dioxide” than conventional bendable concrete.

You can see the material’s improvements in action in the video below:

While normal concrete just snaps, the bendable material is able to maintain its overall integrity under high forces. In all, it is about 400 times more bendable than normal concrete, while having similar overall strength. This is in part due to fibers embedded in the concrete that prevent it from breaking apart completely even if cracks form.

It’s not just earthquakes either; the buildings are significantly more likely to withstand, hurricanes, projectile impacts, and blasts. “Building in areas vulnerable to that sort of natural disaster is one of the main uses that we can see for this material,” says Dr. Nematollahi.

on Swinburne University of Technology

Read next: Eureka? Scientists think they discovered the particle responsible for dark matter