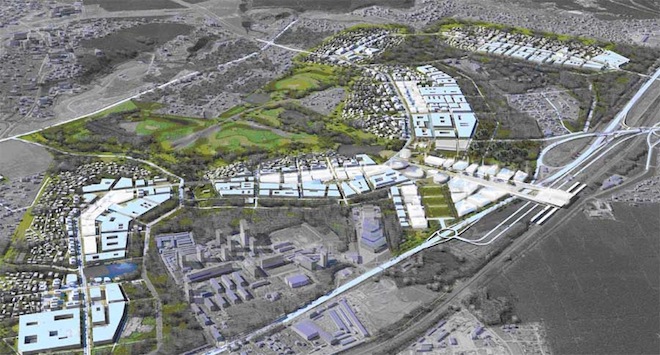 Earlier this week, a handful of journalists and bloggers, myself included, sat down with Alexander Turkot, who heads up the IT cluster of Skolkovo Foundation. This is the non-commercial organization tasked with the creation of a massive ‘innovation center’ project in Russia. The Skolkovo ‘city-laboratory’ initiative undertaken by the Russian government, in partnership with loads of private companies, aims to breathe new life into a variety of industries, including biomed, energy, space and ICT.

Started in November 2010, the Russian government alone has committed to spending about $1 billion per year to make Skolkovo, which is basically an entire, ‘green’ city/campus being built in a suburb just half an hour outside of Moscow, a roaring success. That annual budget doesn’t even include the contributions from the private sector, which are plentiful (more on that below).

Many are skeptical that this ‘Russian Silicon Valley’ has any chance of becoming successful, however, asserting that it’s impossible to recreate something like Silicon Valley simply by constructing ‘technoparks’, an open university, fancy office buildings and residential areas from the ground up (works that are expected to completed by mid-2014), with the government pumping a massive amount of capital into it.

But being a skeptic is easy. What if it turns out to be super fruitful, spurs innovation domestically and creates global market-oriented tech giants in the process?

Turkot, for one, manages an annual budget of about $50 million that can be pumped into Russian technology startups in the form of grants, which means the Skolkovo Foundation doesn’t actually receive equity in any of the companies it backs. Instead, it provides support in the form of computer equipment, office space, Internet infrastructure, legal and financial services, mentoring and whatnot.

About 180 tech companies have already signed up to become part of Skolkovo, with roughly 40 of them receiving financial backing to date.

Incentives for companies joining Skolkovo include tax benefits, looser custom regulations and other measures to help them cut costs and optimize cashflow.

Grants range from a few tens of thousands of dollars up to $10 million and more, depending on the scope of the applying business. Skolkovo Foundation, however, isn’t looking to back yet another mobile social network or game studio.

Rather, the organization looks for science-heavy projects that require a lot of R&D and engineering chops, and (hopefully) result in profitable businesses based on real products while creating valuable intellectual property.

Turkot acknowledged that the early-stage capital they invest in startups is basically ‘stupid money’ but that they work closely with professional investors, MIT and major global technology companies like IBM, Microsoft, Apple, Intel, Nokia, EMC and SAP for the next phases of the businesses in question.

Google is not participating for now, by the way, even if executive chairman and former CEO Eric Schmidt is a member of Skolkovo Foundation’s board.

In the future, Skolkovo Foundation may get more involved with the startups it backs, in terms of investing capital in return for equity.

Last year, Skolkovo Foundation even took a bunch of startups on a roadshow to Silicon Valley, which unexpectedly (for a first time trip) turned out to be a massive success and a great learning experience for the companies involved.

It will be interesting to see what comes out of the whole Skolkovo innovation center project, and out of the IT cluster in particular.

Evidently, we’ll be watching the space closely – we also have a number of Russian Internet scene-related stories coming up later this week.

Read next: What the Lumia sales results mean for Windows Phone