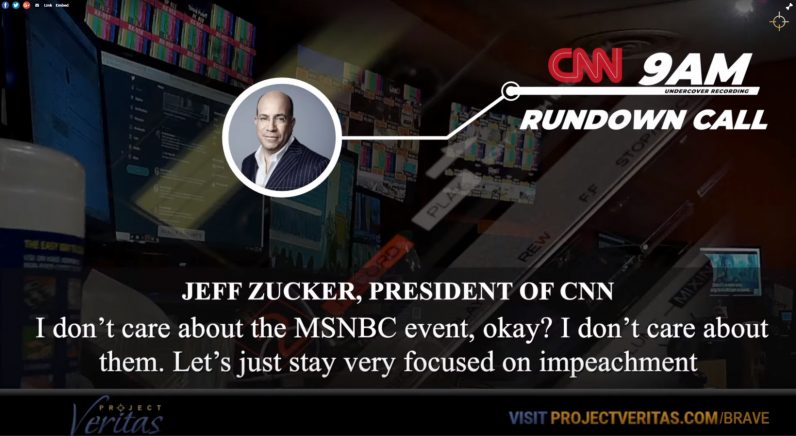 I don’t know how to tell you this, but at least some of the people who work at CNN have a personal bias against President Donald Trump.

According to performance art group Project Veritas, CNN employee Cary Poarch came forward earlier this year with hundreds of hours of video he secretly recorded inside the network. This whistle-blower, we’re to believe, began working at CNN two years ago in an idealistic time when he had no clue the network was a left-leaning outlet. He claims getting the job was “a dream come true.”

Then he found out that some of the employees, including the network President, didn’t like Trump.

A 20-minute video released by Project Veritas today features Poarch and a cast of CNN employees having vague discussions about bias intermingled with audio from CNN president Jeff Zucker. None of it is particularly interesting.

FULL VIDEO IS UP: https://t.co/XbU2a6UpYk#ExposeCNN

The video shows that Zucker wants the network focused on covering Trump, especially as the impeachment proceedings start heating up. The editing makes it look like he’s saying CNN wants Trump impeached, but that’s unclear – either way, the point is that Zucker doesn’t like Trump. He also calls Fox news a propaganda machine that’s dangerous for the country.

A few minutes of the video is dedicated to pointing out that many CNN employees came to work visibly upset the day after Trump was elected. Some employees appear to feel the network gives Democrats softball questions during interviews but are tougher on Republicans. And, according to the video, several employees think CNN is biased against Trump.

"The fake conspiracy nonsense that @FoxNews has spread for years is now deeply embedded in American society…and frankly that is beyond destructive for America." – @CNN President Jeff Zucker

Other revelations include the shocking truth about Don Lemon and Anderson Cooper: they’re politically left-leaning. Is your mind blown right now? Wait until Project Veritas finds out that Tucker Carlson and Bill O’Reilly are right-leaning.

The only revelation is that there’s allegedly hundreds of hours of people at CNN being secretly recorded and this is the best stuff they got. No harassment? No bigotry or misogyny? It’s uncanny.

The people at Project Veritas represent the worst of Alex Jones’ “I’m just asking questions” method of journalism. They push conspiracy theories until they’re debunked and then move on to the next one. They pay people to lie in order to trick journalists into dignifying their conspiracy theories, and then claim ignorance in court. They’re bottom-feeders and provocateurs, and they’re dangerous.

The message here isn’t that CNN is biased, because all news outlets are biased one way or another. It’s that CNN is biased and nobody is doing anything to stop it. This is a tactic Project Veritas uses often. It once pushed a conspiracy theory that Hillary Clinton was running a pedophile ring out of the basement of a pizza restaurant. Its members continued this rhetoric until a man walked into the restaurant with a gun, demanded access to the basement, and then shot at a storage room when he found out the building had no basement.

Meanwhile a violent “parody” video created by Project Veritas associates at TheGeekzTeam  – whose member CarpeDonktum was called “the genius” by Trump when the two met – was shown at a conservative conference over the weekend. The two seemingly unrelated events have a lot of overlap. CarpeDonktum and James O’Keefe, and by extension TheGeekzTeam and Project Veritas, are known to promote each other’s work and both share a near-identical fan base.

BREAKING: @CarpeDonktum 's account has been SUSPENDED. I spoke with Logan Cook, who I shared an exclusive CNN clip with — and his account was suspended immediately upon posting one of the clips where Christian Sierra of CNN DISCUSSING COVERAGE OF SHOOTINGS… pic.twitter.com/KSdgdqYAcv

The video depicts a church shooting scene from the movie “The Kingsman” with Donald Trump‘s face superimposed over the shooter’s and his political and media enemies over the victims’. While dozens of “enemies” of the president are shown in the “parody,” it’s interesting to note that the scene ends with “Trump” burying an axe in “CNN.”

The video’s been around for months, but nobody seems to know how it found its way into the conference this weekend. It was shown “on a small tv in an empty room for a few hours during a three-day event,” according to CarpeDonktum. Subsequent media coverage has ensured it’s been seen by millions online since.

As tempting as it is to laugh at the clownery from these people when they bumble about pretending to be journalists and influencers, it’s important to remember that their target social media audience takes them seriously.

Read next: Microsoft rolls out a public preview of Project xCloud