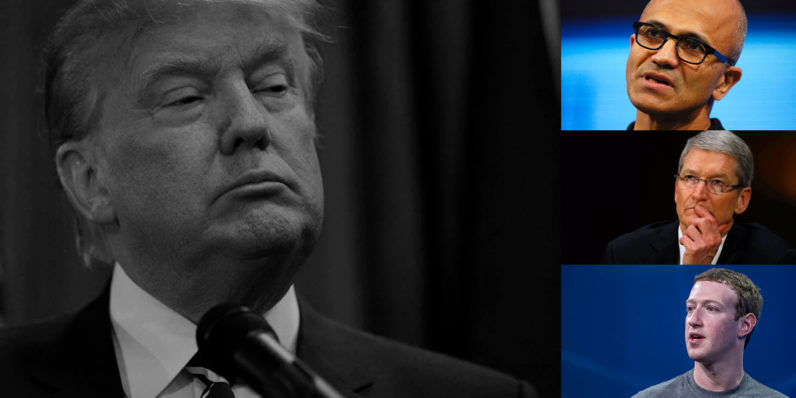 Yesterday, Donald Trump shocked the world when he edged out Hillary Clinton to become President-elect of the United States. Trump’s win, however, evoked a barrage of conflicting reactions, prompting the top dogs of Apple, Microsoft and Facebook to step up and address his stunning triumph.

A palpable sentiment of uncertainty circulated the air in the after-hours of the election, but what does Trump’s less than expected presidential victory mean for the leading tech companies in the US?

Here’s what CEOs Tim Cook, Satya Nadella and Mark Zuckerberg had to say about it.

In the run-up to the election, Trump voiced his desire for the Big A to rely less on foreign manufacturers and transition to building its products locally – a stance he’s upheld even prior to his foray into politics.

While it remains unclear whether Trump has any intentions to follow up on these comments, his forthcoming entrance to the White House later in January is worrisome to many at Apple.

In the immediate aftermath of the election, Tim Cook sent out an internal memo company-wide, reassuring employees that “Apple’s North Star hasn’t changed” and urging them to “move forward together” despite opposing political affiliations.

While the iPhone-maker CEO opted not to go into too much detail about policy and other implications of the electoral outcome, what’s particularly intriguing is that Cook made no explicit mention of Trump’s name or his previous comments.

Read his full statement (as obtained by BuzzFeed) below:

I’ve heard from many of you today about the presidential election. In a political contest where the candidates were so different and each received a similar number of popular votes, it’s inevitable that the aftermath leaves many of you with strong feelings.

We have a very diverse team of employees, including supporters of each of the candidates. Regardless of which candidate each of us supported as individuals, the only way to move forward is to move forward together. I recall something Dr. Martin Luther King, Jr. said 50 years ago: “If you can’t fly, then run. If you can’t run, then walk. If you can’t walk, then crawl, but whatever you do you have to keep moving forward.” This advice is timeless, and a reminder that we only do great work and improve the world by moving forward.

While there is discussion today about uncertainties ahead, you can be confident that Apple’s North Star hasn’t changed. Our products connect people everywhere, and they provide the tools for our customers to do great things to improve their lives and the world at large. Our company is open to all, and we celebrate the diversity of our team here in the United States and around the world — regardless of what they look like, where they come from, how they worship or who they love. I’ve always looked at Apple as one big family and I encourage you to reach out to your co-workers if they are feeling anxious.

Yesterday we witnessed the democratic process in action here in the US. The results are of importance around the world, and I know that interest is shared among Microsoft employees. We congratulate the president-elect, and look forward to working with all those elected yesterday. Our commitment to our mission and values are steadfast, and in particular fostering a diverse and inclusive culture.

While, in a similar fashion to Cook, Nadella refrained from engaging into politics, he also linked to a blog post by Microsoft chief legal office Brad Smith.

Titled “Moving forward together: Our thoughts on the US election,” the piece treads relatively lightly, but does touch upon Trump’s anti-immigration policies, emphasizing Microsoft’s varied employee base as well as devoted committment to diversity.

Things get a little more interesting when Smith approaches the issue of policies on technology and business.

Despite its generally diplomatic tone, Microsoft reminds of its readiness to stand up to administration and fight for “clearer and more modern” policy and laws, pointing out it has previously done so on a number of occasions.

We’re committed to developing technology that is secure and trusted, both for Americans and for people around the world.  We literally have thousands of employees who make this their focus and priority.  And we know that we’ll benefit from stronger government policies as well.  That’s why we’ve not only advocated for clearer and more modern U.S. laws, but have filed lawsuits four times in the past three years against the current administration, standing up for what we believe are the vital rights of people both here and abroad.  As we’ve won the cases we’ve brought, we’ve been reminded of one of this country’s greatest strengths, its strong Constitution, independent judiciary, and the overarching rule of law.

No different than Cook and Nadella, Mark Zuckerberg adopted an identically optimistic and neutral attitude in his statement on the results of the election.

The Facebook boss appealed to citizens and employees by asking them to remain devoted to creating “the world we want for our children,” further adding this cause is “bigger than any presidency.”

Zuckerberg chose not to address earlier accusations Facebook faced for distributing a slew false stories, which might have in turn shifted the electoral outcome in favor of Trump.

Although the Facebook CEO steered away from controversy, a company spokesperson acknowledged the platform’s crucial role in the election earlier in a statement to Bloomberg on Wednesday.

While Facebook played a part in this election, it was just one of many ways people received their information and one of the many ways people connected with their leaders, engaged in the political process and shared their views.

What does that all mean?

Well, not much at this point.

Still, given Trump’s prolonged critique of the tech industry and his advocacy of policies that might very well have negative repercussions for the future of the sector, the passive tone in each and all of these statements strikes me as odd, to say the least.

Politics is a touchy issue – especially when your words reach millions of people. And while I understand the motivation behind the reserved approaches Cook, Nadella and Zuckerberg all took, I still wish they spoke out more openly – regardless of their personal political believes.

Over the last few years, Apple has been much more verbal about its political leanings under Cook’s guidance, but it doesn’t seem to be the case this time around.

When Sillicon Valley cried out in distress following Trump’s presidential triumph, Apple elected to play it safe – and so did Microsoft and Facebook.

via TechCrunch / The Verge / Gizmodo

Read next: When should you trust your gut?