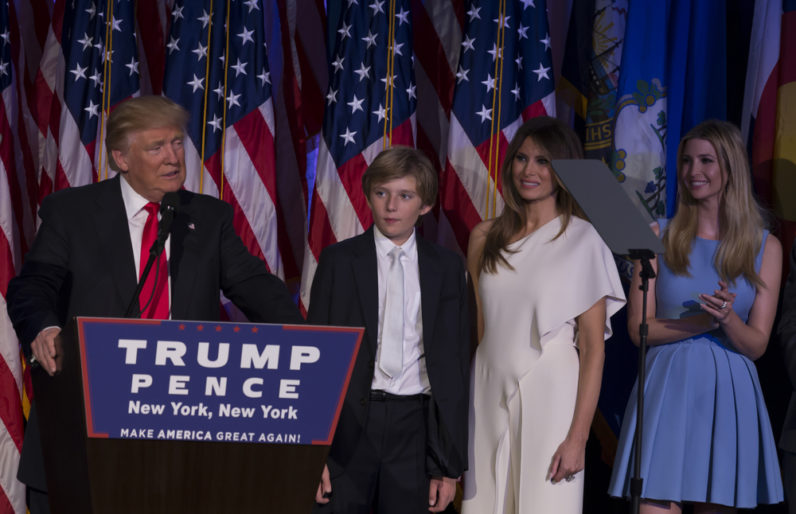 Donald Trump is going to be the 45th President of the United States. For better or for worse, this is a reality that we now have to live with.

Amidst the anger and fear, people are looking for someone to blame. Is it Gary Johnson and Jill Stein, who supposedly siphoned off votes that otherwise would have gone to Hillary Clinton? Is it the 46.9 percent of voters who stayed home on election day? Or is it the out-of-touch coastal elites who didn’t listen to the agony of those living in deprived areas until it was far too late?

Or is it the technology industry?

Innovation is the problem

By virtually all analyses, Donald Trump’s road to the White House was paved by those whose standards of living had tangibly decreased in recent years. And when you look at the reasons why, it’s difficult not to see the grubby fingerprints of tech.

Let’s take a look at one of the centerpieces of Trump’s campaign. Trump often, and loudly, complained about the practice of offshoring, which has disproportionately affected blue-collar jobs.

These were jobs for life. Blue-collar jobs. Jobs that came with benefits, and a union, and ended with retirement. Jobs with dignity. And over the past twenty years, these have been shipped to places where labor costs are lower, and where workplace and environmental regulations are non-existent.

But this is only part of the problem. During the same period, computers have gotten smaller, cheaper, and more powerful. Now, robots are doing the same jobs that people used to do. And the people that once did them have been discarded like a piece of obsolete hardware.

Trust me. It’s only going to get worse. A 2013 Oxford University study estimates that 47 percent of all jobs could be automated in the next twenty years. Most of these are performed by the same frustrated, scared, and angry blue-collar workers that lined up around the block to vote for Trump.

It’s not just manufacturing jobs. Even service jobs are under threat. Last week, McDonalds released an app that would allow you to order and pay for your meal using your smartphone, rather than deal with a cashier.

I’m sorry, but we’ve got our priorities completely fucked. All of us, from technology journalists, to entrepreneurs. We see things like driverless cars and trucks, and we’re impressed. We’re dazzled by news of funding rounds, product launches, and IPOs.

We never think about the human perspective. We should be pushing for programs that help these displaced workers with just the same enthusiasm that we have for… I don’t know… fucking autonomous Uber cars. Because sure as hell, we can’t un-make the computer, much like Ned Ludd couldn’t un-make the stocking frame.

This brings me to my next point. I truly believe that the vast majority of us, regardless of where we sit on the political spectrum, think that it’s the job of the public sector to catch those who fall through the cracks of the private sector. The only real point of quarrel is the extent to which this should happen.

But it’s hard to have a social safety net, good schools, and solid infrastructure when the government has no money. Tech companies avoid taxes, and they do it on an industrial scale.

Both Apple and Google are notorious for the “creative” ways in which they avoid taxes. This isn’t just limited to their activities in the US, either.

Earlier this year, the European Commission ruled that Apple should pay Ireland €13 billion ($14.5 billion) in taxes, after it accused the country of having a sweetheart deal with the tech company that allowed it to reduce its effective tax rate to just 0.005 percent.

That’s not a typo. That’s literally how much they were paying.

All the companies mentioned are fabulously wealthy. They can afford to pay their fair share. But they don’t, and that means that your child has to go to a worse school, you’ve got to drive on a pot-holed road, and the government is less able support people who fall on hard times.

It’s pure, unadulterated avarice, and it harms us all.

If a well-informed electorate is essential for a functioning democracy, then it could be argued that Twitter and Facebook have been disastrous during this election cycle. On both sides of the political fence, fact and reasoned argument have been shouted down by louder, angrier, incoherent noises.

These platforms have been built, and then they’ve largely been left alone. There’s an absence of any sort of moderation. This has lead to the spread of fake news designed to pander to our biases, created solely for the purposes of earning ad-clicks.

You might have read Buzzfeed’s jaw-dropping story about how teenagers from one town in Macedonia created a cottage industry of inflamatory, largely fake (“Pope Francis forbids Catholics from voting for Hillary!”, read one) Donald Trump news that was designed to go viral.

According to the report, over 100 websites were being run from one town, Veles, in the central part of the country. And this nonsense (there’s really no other word for it) overshadowed actual reporting from credible journalists, researchers, and experts.

In general, I’m becoming increasingly cynical about social media’s ability to connect. The evidence shows that rather than bringing us together.

As I argued yesterday, social media has allowed us to filter out the voices we don’t want to hear. The end result is neither side really understands the other, and we are more divided.

We live in echo chambers and filter bubbles, and the only opinions and news we engage with are those that conform to our previously-held beliefs. We do this unknowingly, yet also intentionally.

This isn’t a left-right issue. This isn’t about Clinton or Trump. This isn’t even an American issue, because I saw the same thing in the run-up to the Brexit referendum. This is just an unfortunate and undeniable reality of how these platforms work. I worry it’s having a malign impact on our democracy.

Will history repeat itself?

I’ve worked for startups. I have a computer science degree. I’ve been to dozens of technology conferences in cities around the world. I’m a technology reporter for a major tech news website. As a result, I spend a lot of time speaking to founders.

I’ve noticed that founders tend to have a utopian mindset. That’s the nature of what it’s like to be a founder. They want to build a better world. They want to do this by building products that solve problems.

Some of these problems are pretty small. “My alarm clock sucks, let’s build a better one.” Others are more lofty. “Let’s build a fast, affordable, green system of mass-transportation.”

This is fine. Startups and innovation are, largely, good for the world. Although I do worry that some founders don’t anticipate the impact that their products will have on the world. They don’t anticipate the long-term consequences of what they’ve built, and what that means for society. And I worry that some startups and tech companies are more guided by what earns them more money than simply doing the right thing.

And I worry that the next big innovation and the next unicorn will unknowingly contribute to the malaise and unhappiness that will lead to the rise of the next Donald J Trump. And that really scares me.

Read next: WhatsApp beefs up security with two-step verification