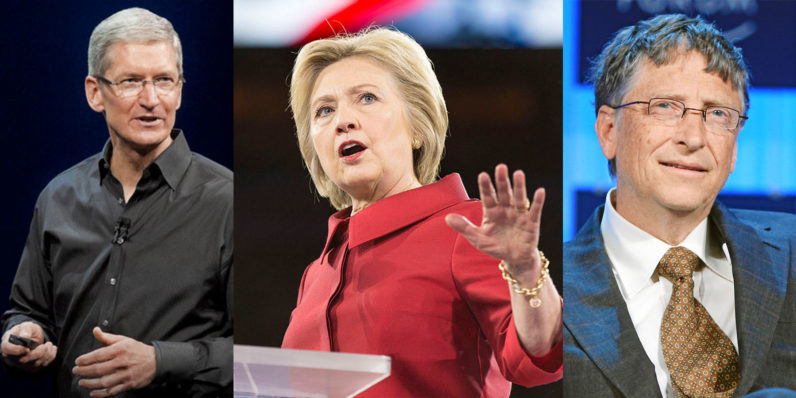 All-knowing commenters often tell tech reporters to stay out of politics, but this one we really can’t avoid. According to the most recent WikiLeaks hack on Hillary Clinton’s campaign, tech moguls as notable as Bill Gates and Tim Cook were considered as potential Vice Presidential candidates.

As first reported by Gizmodo, the email was stolen from Clinton campaign chair, John Podesta, and includes a variety of politicians, military officers, and CEOs. Particularly notable to the techies out there are Tim Cook, Bill Gates, and Melinda Gates – Cook would have been the first openly gay vice president, and Melida Gates the first woman. Other candidates included former NYC mayor Michael Bloomberg, Xerox CEO Ursula Burns, Starbucks and Starbucks CEO Howard Schulz more.

The message was sent on March 13 of this year, and Podesta calls it a “first cut.” It’s interesting to see tech giants being mentioned that early in the game, though there’s no telling how far into the selection process they actually got, or whether they ever even knew they were being considered.

You can read the full email below, which separates the candidates into various “food groups” or themes:

Ok, I can breathe again! Congrats on a fabulous night. I am feeling like it’s possible to get back to the longer term again. Cheryl and I met with Jim Hamilton on Friday to discuss lawyers who can help do the research and vetting that I outlined in the VP vet memo we discussed. We also met with Marc Elias to get his input on firms that have already provided substantial volunteer lawyer assistance and to get prepared to execute non-disclosure agreements with anyone we involve in the process.

We put together the attached notional teams of “report writers” (confidential profiles/public record vet) and “vettors” (deep-dive/oppo-book), and want to run it by you before we execute on the list. Let me know if there are people you would like to see added or removed before we begin the process.

Cheryl, Robby, Jake, Huma, Jennifer and I also did a first cut of people to consider for VP. I have organized names in rough food groups.

Read next: OP Delivers is a delightful 2D platformer inspired by Reddit's culture