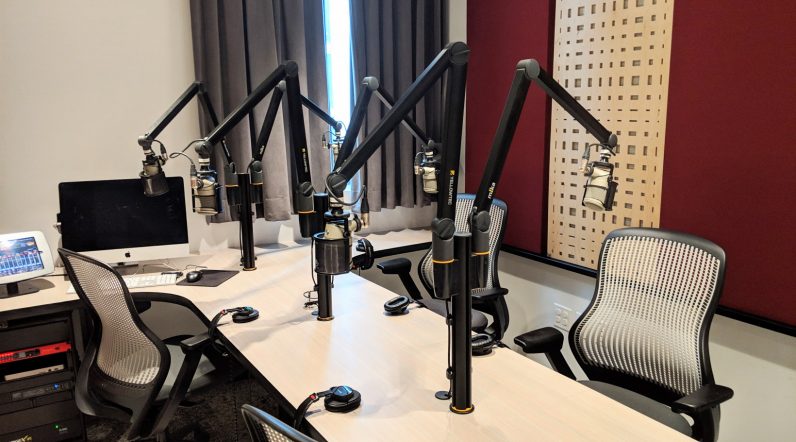 Picture a professional recording studio. What do you see?

Perhaps a band rocking out in an acoustically treated room, or a vocalist singing softly into an expensive microphone. Artists and engineers will spend thousands to build or use studios that provide the acoustics and consistency they need to do their jobs. But in recent years, a different kind of recording studio has emerged: the podcast studio.

Consider the case of Gimlet, a podcast network known for its high production values, acquired by Spotify for $230 million earlier this year. Within a few years, Gimlet grew from a humble studio operation to building a custom, 28,000 square-foot production facility in Brooklyn. In doing so, it hired the Walters-Storyk Design Group, a renowned acoustic architecture firm, to help create 12 rooms dedicated to podcasting.

You may not have heard of WSDG, but you’ve probably heard some of the music it’s helped create. John Storyk, who founded WSDG with his wife Beth Walters, has been responsible for thousands of studios around the world. His first big project was Electric Lady studios for Jimi Hendrix in NYC, and he’s since helmed projects for a myriad of clients including Whitney Houston, Alicia Keys, and Jay Z.

After touring Gimlet’s new recording facilities earlier this year, I had the chance to speak with Storyk about the challenges of designing a recording studio specifically for podcasting.

By now, some of you are probably wondering why one would hire an entire acoustics firm simply to create some podcast rooms. After all, aren’t podcasts just a person or two rambling about a topic for an hour? Indeed, most podcasters start out with something like this. “Podcasting could be as simple as a Mac computer in a bedroom, or as simple as this phone call,” acknowledges Storyk.

But despite the low barrier for entry – or perhaps because of it – podcasts are exploding. There’s something out there for everyone, and you can listen to a podcast at times when reading an article or watching a video would be inconvenient.

According to a March 2019 survey by Edison Research and Triton Digital, about a third of Americans over 12 had listened to a podcast in the last month – and about 40 percent if you only include people under 54. That number was only about 30 percent in the 2018 survey.  More telling, an estimated 22 percent of Americans over 12 – about 62 million – listen to podcasts every week.

So while it doesn’t cost very much to start a podcast or build a small following, “at the end of the day, there’s only so much bandwidth for all this podcasting,” says Storyk. That means creators have to up their game to catch your ear. “The levels of production on podcasts have gotten much more complicated… demanding much more sophisticated production techniques.”

Podcasters vying for your attention might produce hour-long shows across several days, involving multiple interviews, original music, and extensive post-production. Once you go beyond the simple uncut interview or discussion, consistency and efficiency are key. You need “equipment that’s stable and rooms that are stable.”

Herein lies one of the biggest challenges WSDG encountered designing rooms for Gimlet. When you record music, it pretty much all happens in one room. But at Gimlet, podcasters tend to work on long-term projects and might use almost any of the dozen rooms, which vary dramatically in size and shape. Some have more windows than others, some were designed to house a pair of people, while others are made for large groups.

According to Storyk, WSDG had to find a way to make these rooms sound “basically exactly the same” to ensure consistency within and between podcasts. If the recording sounded different from one segment of a podcast to another, it would stand out like a sore thumb. This isn’t a concern with music, in which albums are generally recorded in the same space, and there’s more going on to mask any differences anyway.

Further complicating matters is the fact the podcast studios are mostly small, adjacent rooms. Though the decibel level won’t typically get as high as with music rooms and you don’t have to deal with as many bass frequencies, WSDG needed to provide significant isolation between a dozen rooms mostly lined up against one another. You don’t want to ruin a recording session to be ruined if the podcast next door devolves into a shouting match.

On top of this, the rooms still need to let in some sunlight and actually, you know, look nice. The architectural challenge is as much visual as it is acoustic, and WSDG needs to work within both budgetary and aesthetic constraints.

That said, sometimes podcast studios do pull double duty as music studios. Licensing music to use in an intro or provide a background to your narration is expensive, so more podcasters are turning to creating their own music. And not all podcasts are people talking about crime, history, or food. Other’s, like Gimlet’s The Two Princes, are the modern-day version of the radio drama. They’re original stories with original soundtracks. For these purposes, Gimlet and WSDG built a 375 square-foot live room that behaves more like a traditional music studio.

It comes down to efficiency. Despite the freedom provided by podcasting format, our attention is still a limited resource, and podcasting networks will compete for it. “These companies are vying for the premier talent. They all would like to get 30 minutes with Taylor Swift, or with a politician, a self-help guru, or a famous athlete,” remarks Storyk. The equipment has to work perfectly and operations flow smoothly because “the high-level talent, they’re only going to be there for 30 minutes. They’re not going to put up for four hours because ‘oops, we made a mistake, we have to do it again.”

That podcasts are even able to get such exclusive guests speaks to the growing influence of the format. As with the audiobooks, podcasts give us the power to reclaim some time for ourselves within the hubbub of modern life. Sure, Gimlet’s Homecoming podcast might have become an Amazon Prime series, but you can’t exactly watch TV while driving or walking the dog.

But nobody wants the bedroom podcaster to go away. Accessibility is part of a podcast‘s appeal; all you need is a laptop and a good idea. But when your hobby starts to become your livelihood, the stakes change. In the same way, YouTube channels can grow from webcam operations to TV-scale productions, professional podcasters increasingly seek ways to stand out and produce content more reliably and efficiently.

“As the level of production gets better and more sophisticated because the competition is getting more intense… the need to have very accurate sounding rooms and very stable and accurate equipment systems becomes more important,” says Storyk. “When that happens, we get a call.”

I suspect Storyk will be getting a lot more calls in the years to come.

Read next: MoviePass is effectively dead and will shut down September 14