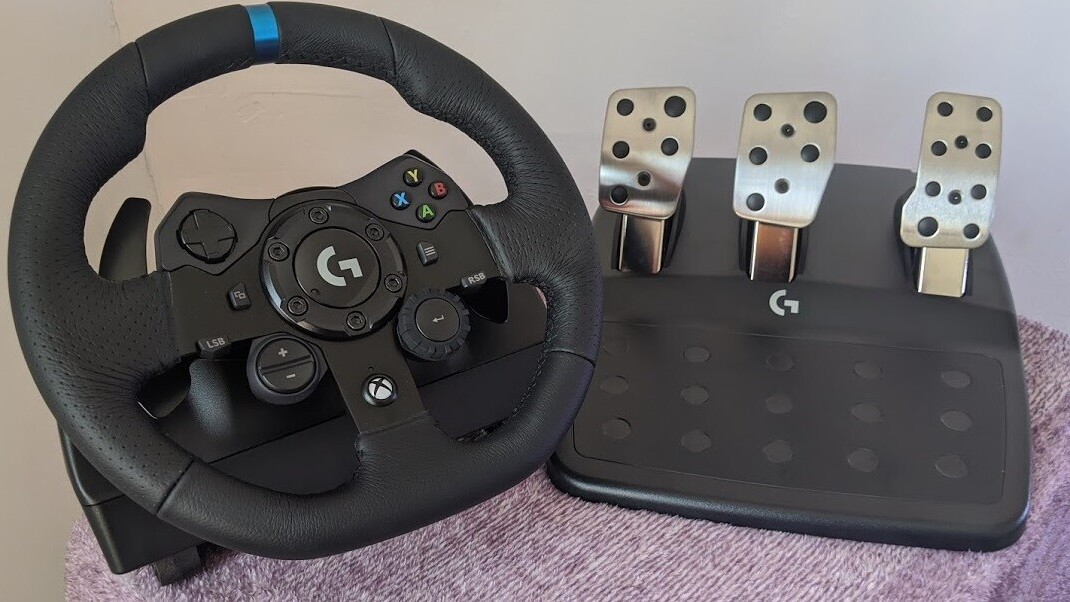 There’s nothing quite like the thrill of the open road. When I was a younger man, there were few things in life that gave me more joy than hitting the interstate after work in my black Ford Mustang.

But, like millions of other people, I’m now disabled and unable to safely operate a motor vehicle. A few years back I started to really get into racing sims to try and scratch the old driving itch and, shockingly, it actually helped.

Games such as Forza Motorsport 7 and Gran Turismo Sport eschew arcade exploits and over-the-top design in favor of immersive photo and audio realism. Don’t get me wrong, games from franchises such as the Burnout and Need For Speed series are fun, but they don’t make me feel like I’m actually driving a car.

With the right monitor (like this curved one from Alienware I reviewed awhile back) and a decent set of headphones, I can just about lose myself running laps in Forza. I say “just about” because there’s one thing that’s been missing: a proper steering wheel controller.

There are dozens of steering wheel controllers out there but Logitech’s are arguably the most popular. I was a huge fan of the G920, so when the company offered to let me test the all-new G923 I jumped at the opportunity.

I tested the G923 Xbox/PC version. Despite a few compatibility issues at launch it appears to be working with every game it’s supposed to now. I can’t speak to whether the PS4 version is working properly, but I wasn’t able to find any recent complaints online so I’m assuming it is.

Those of you familiar with the G920 will notice that, aesthetically, not much has changed. The major differences between the two models are mostly internal, though you may notice the LED display mounted on the top of the G923, a nifty addition that works as an RPM meter in many games.

That being said, it’s easy to see why Logitech didn’t attempt any radical changes. Just look at this thing, it’s gorgeous:

It’s difficult to gauge size in these images, but this thing feels like a junior-size version of a super-car steering wheel. I was surprised at how much attention to detail went into the leather and stitching. This isn’t a plastic toy by any means. It’s apparent Logitech is trying to bridge the gap between “real racing wheels” and video game controllers. And it’s having a lot of success.

The G923 racing wheel also comes with racing pedals. The gorgeous, brushed-metal pedals stand out as much as the racing wheel in the looks department: 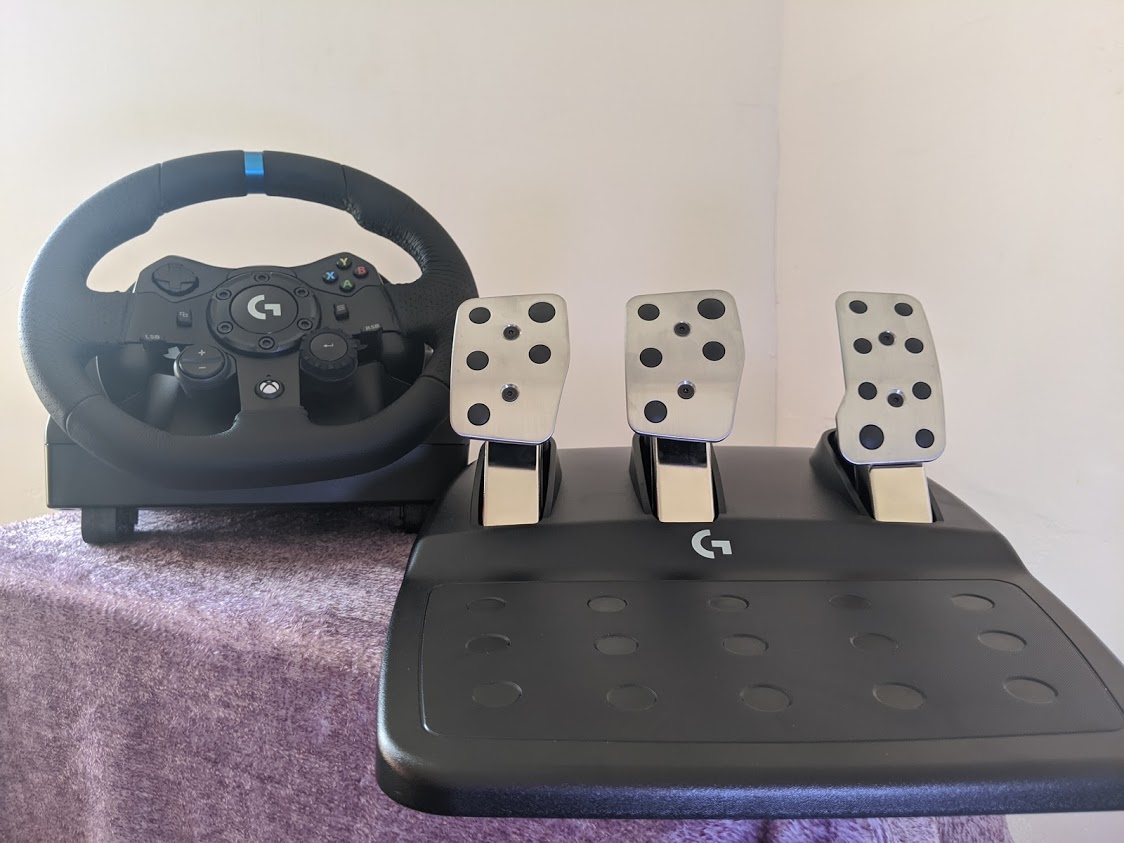 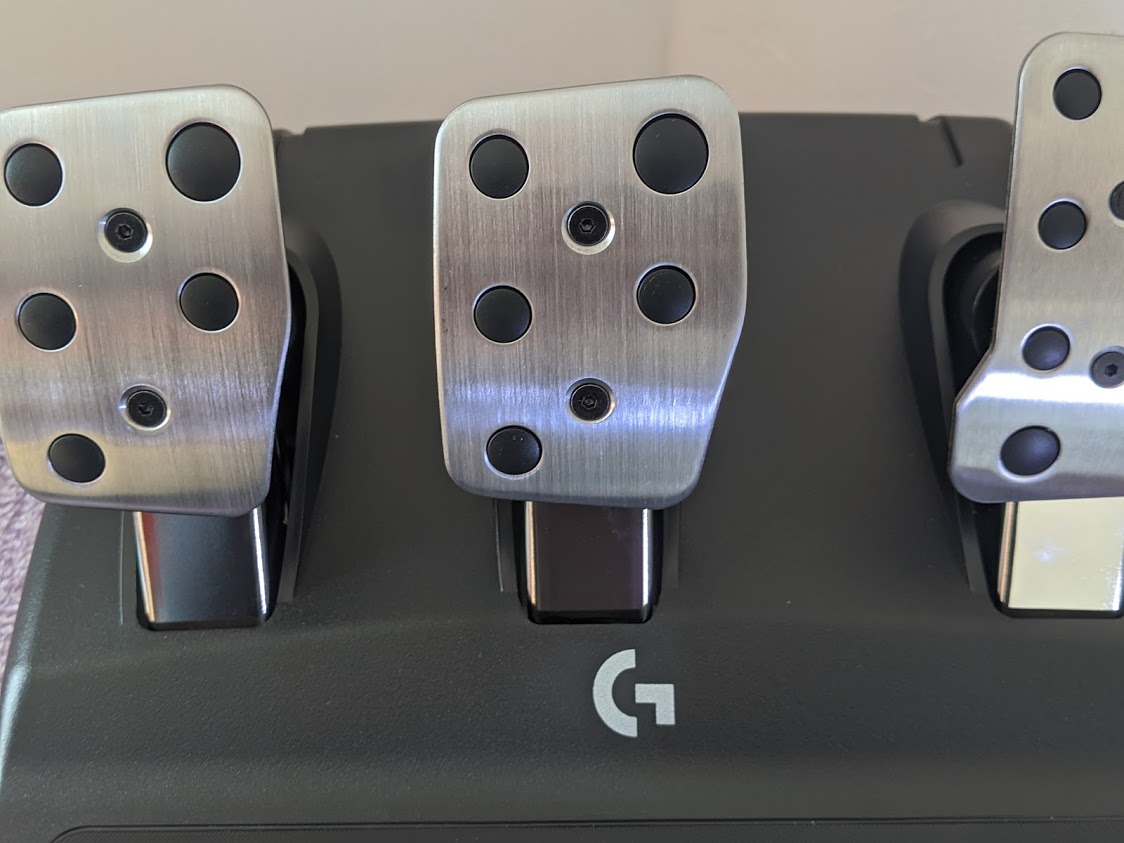 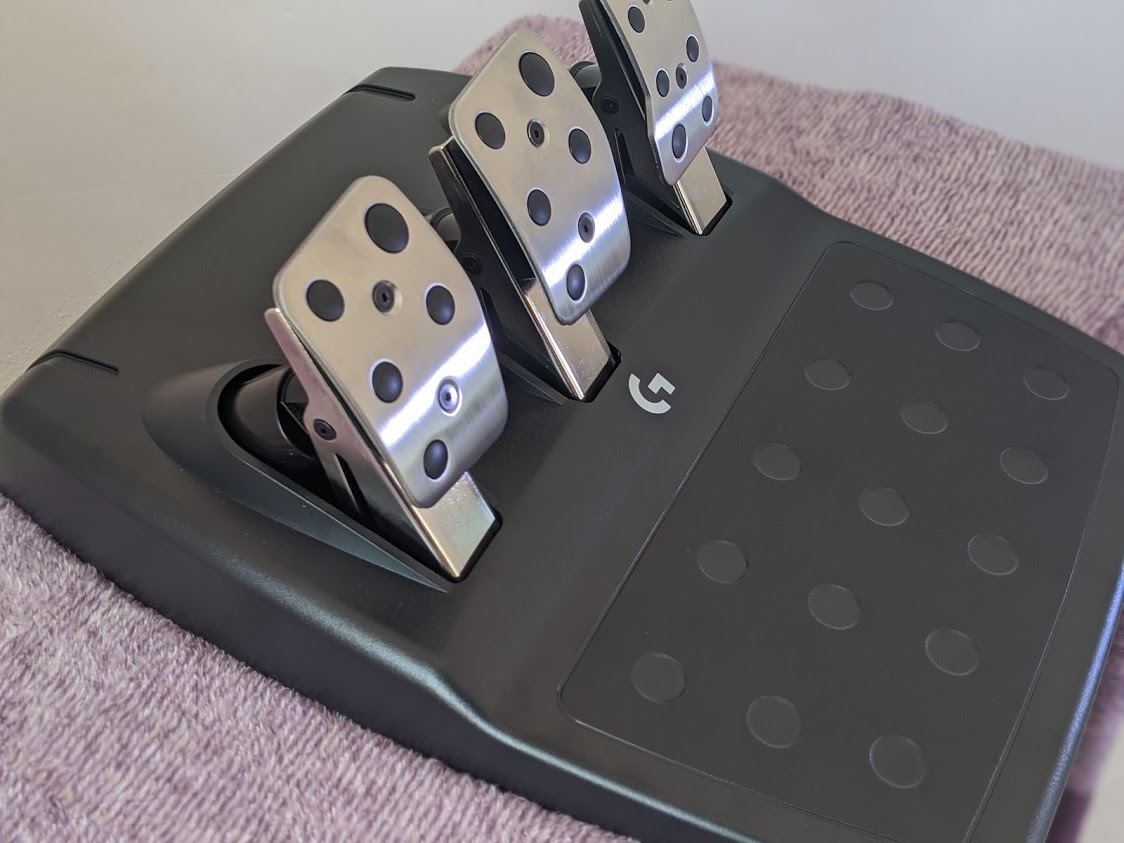 They also feature an upgrade over previous iterations in the form of a rubber bushing in the brake pedal that’s supposed to help “develop muscle memory” when braking. I found it to be a mixed bag. On the one hand, it definitely mimics what a racing brake pedal feels like better than the old ones, but on the other it’s a pain in the ass to use if your floor isn’t carpeted.

The gist of it is the brake pedal has much more resistance than the clutch and gas pedals. A quick search online will tell you that many customers have taken the rig apart to remove the rubber because they don’t like how much “harder” it is to push.

I actually like the amount of resistance the brake pedal gives with the rubber bushing, but because of the pedal’s angle and the extra force necessary to “slam on the brakes” when I’m, for example, drifting, I end up kicking the entire setup away from me.

This isn’t a problem if you’re playing on a carpeted surface. Logitech’s clever design makes the pedals super-grippy on most plush carpets. But on my stone-tile floor it’s quite slippery.

This problem is easily solved by buttressing it against something heavy so it’s not a deal-breaker. I just wish it had some rubber on the bottom. There’s a bunch of soft rubber feet down there, but they’re tiny and do absolutely nothing to stop it from sliding.

Let’s talk about what it’s like to use the G923. I fell in love. It’s got paddle shifters, all the traditional Xbox or PS controller buttons, and a d-pad so you can use it as your only controller. There is one caveat: if you plan on using a headset while playing with the G923 on Xbox One you’ll have to connect it to a separate controller because the G923 doesn’t support wired or wireless headsets.

I love the way the G923 feels in my hands. Despite its diminutive size (when compared to production vehicles’ normal steering wheels) everything feels properly spaced. The paddles are so well-designed that I found myself compelled to stop using automatic transmission settings – a decision that’s served me well when it comes to attacking my best track times.

But the best things about the G923 are on the inside. Logitech’s absolutely nailed the vibration and force feedback with this controller. You can smash the gas, close your eyes, and feel the road beneath you. As you start to drift off track the vibration changes and it feels like you’re in dirt or gravel instead of on asphalt.

And when you turn, the way the wheel resists (called force feedback) is different depending on how fast you’re traveling, what kind of surface you’re on, and what vehicle you’re in. It’s an amazing feeling that really ties the immersive experience of playing a racing sim together – especially in ‘cockpit’ view.

This is nothing new though. The past few generations of racing wheels (including the G920) have been excellent at vibration and force feedback. And while the G923 seems to have improved even more on previous iterations, it’s the all-new True Force feature that separates it from the herd.

I’d say that’s a pretty good description, but it doesn’t explain what that feels like in action. True Force requires game developers to code in support so it’s currently only available in a handful of titles (list here). I checked it out in a short playtest with Assetto Corsa Competizione on Xbox One.

Simply put: True Force is incredibly impressive. It fills in the blanks that other feedback systems don’t. For example, when you’re rocketing down a straightaway at 150 MPH in most games there’s little to no wheel vibration. But in a real car traveling at high speed on imperfect terrain there’s always going to be some vibration, especially if said vehicle has a combustion engine.

True Force translates engine vibrations into steering wheel vibrations. This makes it feel much more like you’re driving a real car. I was able to visualize which tires were losing grip when I over/under-steered into or out of corners and this seemed to help me correct quicker and more accurately.

Overall, I found the G923 to be a worthy upgrade. Given the choice between finding a G920 on sale or purchasing the all new G923 I’d go with the latter just for the opportunity to play any upcoming titles that get support for True Force.

No gadget is perfect though, and I was able to find some faults with this racing wheel. Firstly, I’m not a big fan of the mounting system. I think Logitech’s done the best it could here. It’s designed to work well with a desk or table.

But you really need a dedicated racing chair to get the most out of it. As I don’t currently have one, I would have much preferred a lap-contour that let me rest it on my thighs or some way to put it on top of my desk.

Another thing I didn’t like was the way it always spins through it’s full range, back and forth, when it powers up. If you happen to dismount the controller but forget to disconnect it you run the risk of having a steering wheel with a pretty powerful set motors driving it flopping around for a few seconds.

Issues aside, I highly recommend the Logitech G923 racing wheel. It’s the closest I’ve been to driving a real car in a long time.

You can pick yours up on Amazon where it’s currently on sale for less than $300.