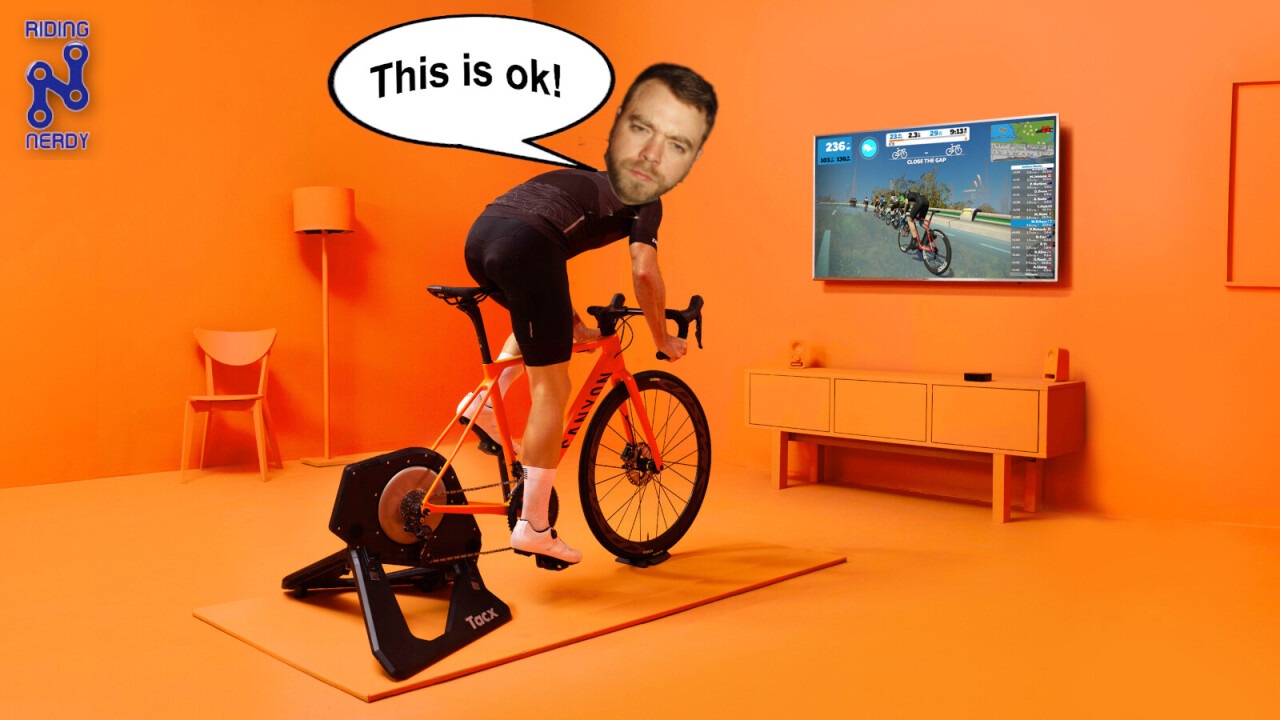 I need to make a confession. When it comes to cycling, I err on the side of old-school. Lots of cyclists these days pride themselves on having the latest tech, gadgets, equipment, and using the most progressive training regimens. Like much of the tech industry, manufacturers make money and stay in business by selling new iterations of equipment and gadgets which have marginal improvements over last year’s models.

I, on the other hand, pride myself in having equipment that works for my specific needs and makes a significant difference to my riding. I invest only in what is absolutely required.

But Zwift has made me realize, I don’t always get it right.

In the Northern Hemisphere, the weather during many months of the year render cycling outdoors an utterly miserable experience. Mostly through winter, days are beset by driving wind, rain, ice, and sleet. Weather that most of us would prefer to avoid.

On such days, like a runner in search of a treadmill, many cyclists retreat to spare bedrooms and garages to hop on to “turbo trainers,” devices that you hook your race bike up to so that you can train effectively during the winter. They work by attaching to the rear wheel and creating resistance, usually with magnets or variable viscosity fluids.

Traditional turbo trainers are usually noisy machines that wail and drone as you cycle along. You don’t move anywhere, and you end up staring at the same “view” for hours on end. It leads to an exercise that is dull, mentally draining, and takes a lot of motivation to complete.

They do fulfil their primary objective of providing a workout, though. They’re a necessary evil when it comes to maintaining some fitness through the winter months.

But Zwift is showing me there is another way.

Zwift has been around for about four years now, and is best described as a multiplayer online cycling game. But rather than a controller, keyboard, or mouse to control your in-game avatar, you can use a “smart trainer,” a high-tech ultra modern turbo trainer. It should be pointed out that smart trainers aren’t cheap either, they can cost anywhere from $500 to north of $1,000. There are cheaper alternatives, but for the full experience you really need a smart trainer.

After downloading the Zwift app ($14 per month), setting up your profile, pairing a compatible smart trainer, and attaching your bike, you’re pretty much ready to get going. For more information on how to start “Zwifting,” watch this informative video from Global Cycling Network.

Using Bluetooth, Zwift “talks” to the smart trainer telling it to adjust the intensity of resistance that a rider must push against. This lets the user program a work out and then just hang on for dear life until it’s over.

In doing so, it removes a huge amount of thinking from training. It means you just have to react to what is happening in-game, as you would have to in the real world.

Before Zwift, I would normally write out a training plan on paper beforehand, and use strips of masking tape stuck on my bike and a stopwatch to count the intervals — I’d rip a strip off after every effort. Each interval would be based on a desired heart rate. It was all stick, and no carrot.

With Zwift however, I have all of this data and more right in front of me on a laptop screen. It displays power, cadence, counts intervals, tells me exactly how hard to ride at any given moment, and displays beguiling words of encouragement to keep me working hard.

You also get rewarded with stars, points, and in-game content — like socks, sunglasses, or new bikes for your avatar — for successfully completing intervals, achievements, and tasks. You can also spend your points on more expensive in game content like faster wheels or new bicycle frames in Zwift’s load-out interface, the “drop shop.”

Even though they are simple and common game mechanics, they elevate the experience and make it more interesting than what would otherwise be a high heart rate math lesson. It’s more carrot, and less stick.

It’s more than just a “game”

Video games are often criticized for turning players into lazy couch potatoes, but Zwift promises to make you fitter the more you “play” (I’m actually putting this to the test, so check back in the new year for my ‘gains’ update.).

Gamers will be familiar with its virtual gamified mechanics, and cyclists will understand its technical training side. But to call Zwift “gamified” and leave it at that is an injustice. Sure, Zwift has common elements we’re familiar with in online games, as I’ve mentioned, but it is far more. It’s a virtual world unto itself.

It’s developed such a strong community that it has its own e-racing leagues, national champions, and Zwift is even campaigning for it to become an Olympic sport.

Into the virtual world

All Zwift rides happen in a virtual Zwift world. Some are representations of real world locations like London, Innsbruck, and the most recent world championship course in Yorkshire. But there is also Zwift’s own unique world, known as Watopia.

As you ride around these worlds, Zwift tells your smart trainer to increase the intensity based on what happens in-game. When the road points skyward, the trainer’s resistance will increase to replicate how that same gradient would feel in real life. When you descend, the trainer simulates the freewheel effect of coasting downhill.

What’s more, using the Zwift companion app alongside the main program you can do amusing things like “ring” your bike bell to let other in-game athletes know you’re coming. Or wave your hand to riders going the opposite direction.

Speaking of which,  all the other “Zwifters” in-game that provide a welcome distraction from one’s own pains and remind me that I’m not alone. A solitary, painful experience is shared online, sometimes with actual friends, and in doing so, the whole thing becomes less tortuous. In this case too, it’s way more carrot and way less stick.

Of course, it’s not actually you doing these things, it’s your in-game avatar. But these mechanics provide a connection between the real and virtual worlds you inhabit while “Zwifting.”

When all of these things come together, I’m drawn into the virtual world and am able to focus on the ride, and ignore stimuli from the physical world. Seeing your avatar respond to the physical effort you’re putting in — and feeling that effort yourself first-hand while riding on the smart trainer — bridges the gap between what is real and what is not.

A substitute for winter

I’ll be honest: My old-school masochist views on indoor training have largely led me to dismiss Zwift until now. I’ve often regarded it as “non-essential” and expensive. I have always tried to ride outside as much as I can, because it is just so much more enjoyable and time passes much quicker than old-school turbo sessions.

After riding on Zwift for a little over a week, I’m changing my mind, though. Don’t underestimate how big of a deal this is.

Perhaps the best bit though, is that I haven’t had to clean my bike.

On a smart trainer in Zwift, the pain and suffering of training are still experienced, if not more so than on old “dumb trainers.” The Tacx Neo 2 I’m using has a peak resistance of over 2,000 watts, which is just about enough for even Olympic-level track sprinters.

But with the addition of immersing yourself in Zwift’s virtual world, the monotony and the intense staring into space, wondering what led you to sit on a stationary bike for hours on end, is curtailed and softened. So much so, that Zwift provides more than just a distraction, it’s an all-round engaging experience.

One that’s so convincing, I might not bother riding outside this winter at all.