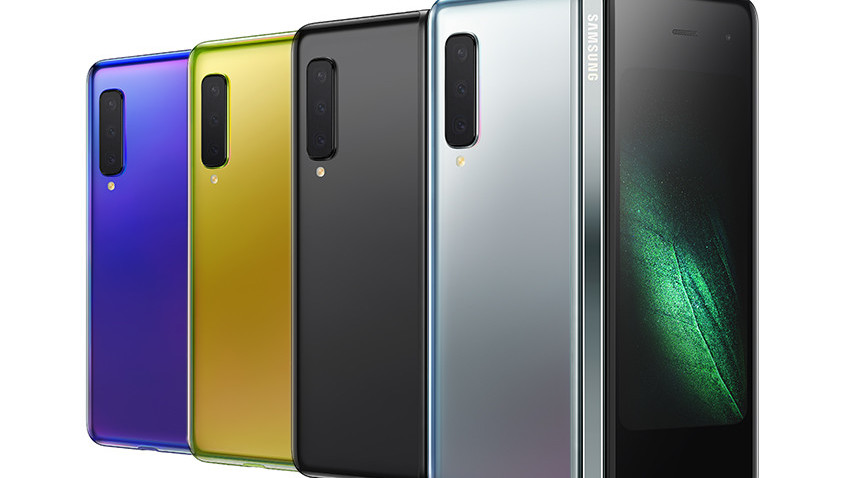 Yesterday, Samsung unveiled its most ambitious phone to date — the ultra-flexible Samsung Galaxy Fold. This 5G-enabled tablet-smartphone hybrid will retail at roughly $2,000, and is expected to hit shelves in April this year.

Even to those who cover the smartphone industry professionally, the announcement was a genuine surprise — which, believe me, is a rarity these days. Although most people knew a foldable phone was on the near-horizon, it didn’t seem quite this close. Most expected Samsung to announce it during the manic hubbub of Mobile World Congress, which takes place in Barcelona next week.

If I was a gambling man, I’d say that Samsung is unlikely to shift many units. The Galaxy Fold is perhaps the definition of a niche phone, but its price-tag puts it far beyond the reach of most people. Then again, never of those things have deterred Samsung in the past. By the standards of the Android market, it’s handsets are expensive, and the Korean giant is known for producing deeply experimental phones. Remember 2012’s Samsung Galaxy Beam, which packed an integrated projector?

No, It’s far more likely that Samsung regards the Galaxy Fold as the bold overture to a new type of phone — and indeed, a new type of computer. And why wouldn’t it? Furthermore, if I could be so bold, I’d say that foldable handsets have the potential to succeed where tablets failed.

It’s almost nine years since Apple first introduced the iPad. While they serve a valuable niche in education, and as content consumption devices (give me a choice between watching Netflix on an iPad or a laptop and I’ll choose the iPad every time), they haven’t really taken off in the way people perhaps imagined. They haven’t replaced our computers. Worse, sales slumped continuously in the fifteen quarters leading up to Q2 2018.

Why is that? Analysts have several credible theories, ranging from a lack of tablet optimization for apps, to the belief that the market was cannibalized by the rise of cheap and conventional chromebooks, which are better suited to work-related tasks. Personally, I’d argue that a major factor was most people don’t really want to carry multiple devices that broadly perform the same function. Most tablets, after all, have the same internals as smartphones, down to the chipset. The sole differentiating factors are the larger screen, and often the absence of a built-in cellular connection.

But now we have foldable phones, which combine the ergonomics of a smartphone with the screen real estate of a tablet. There’s no need to carry two devices, and there’s no fumbling with tethering an iPad to a phone, or scouring for an open Wi-Fi hotspot. You can carry around a larger screen without having to lug a backpack or briefcase with you. I think for most people, that’s a really exciting proposition.

It’s also obvious that Samsung has paid great thought to how the Galaxy Fold will work as a tablet. I was really excited about its multitasking features, allowing it to run three apps simultaneously. So, you can have your emails in one section of the screen, Slack in another, while having Spotify playing in another. Multitasking was virtually absent in early tablets, but now mobile software has managed to catch up.

The biggest difference with foldable phones and the tablet market is, obviously, price. The first-generation iPad had a starting price of $499 which, although not cheap, was attainable for many, allowing Apple to sell 15 million units. This, combined with the various Android-powered devices that shortly followed, like the Google Nexus 7, created a tablet market where one previously didn’t exist.

Foldable phones, on the other hand, are different. The cheapest model is a good $500 more expensive than the most expensive iPhone. That goes beyond pure luxury, and ensures the Galaxy Fold remains the preserve of deep-pocketed early adopters. At least, at first. It’s only a matter of time until the technology becomes commoditized enough to allow other firms to produce their own efforts. We saw a similar phenomenon with notched displays. Just a few months after Apple unveiled the iPhone X, brands like Asus, Leagoo, Doogee and Oukitel unveiled their own copycats.

I think it’s probable that foldable phones will take time to achieve any measure of success. But although their growth may be slow, there’s a real prospect of them having serious long-term staying power, unlike tablet computers.

There’s another exciting prospect that I want to end on. Premium Samsung phones can be plugged into a USB hub and used like a traditional computer. The technology, Samsung DeX (short for “desktop experience”) has been around for a bit now, and has matured to the point where it’s a viable alternative for basic computing tasks. The Galaxy Fold comes with DeX built-in, meaning that it’s the first consumer device that can operate across all segments of the computer market — mobile, tablet, and desktop.

How exciting is that?