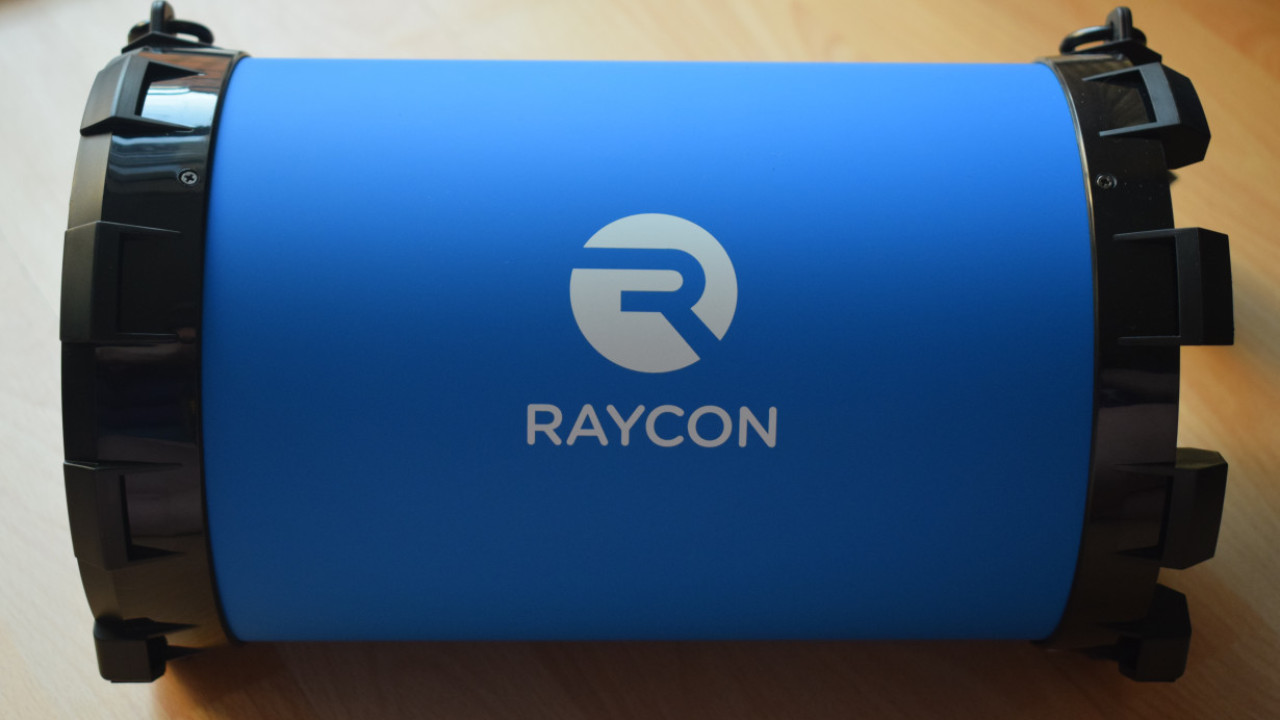 Another day, another thing to review. This time around, I’m looking at the Raycon Turbo Cannon XL Bluetooth speaker.

This device — which is a bit like a boombox for the digital age, promising to annoy anyone in close proximity — is loud as hell, and packs 12W drivers. It also supports a variety of audio connectivity formats, including Bluetooth, SD card, and AUX-in.

Raycon? Never heard of them.

Raycon is indeed a fairly new player in the audio world.

It was founded by rapper Ray J in 2006 as Raytroniks, which was a vehicle (pun intended) to sell a line of pricey electronic bikes called the “Scoot-E Bike.” They were a bit like those irritating hoverboards, but somewhat more practical, and with less of a propensity to set houses aflame.

Late last year, the company re-branded as RayCon and inked a $31 million deal with the New York-based Cowboy Wholesale, which brought it into the more mass-market sphere of Bluetooth headsets and speakers.

He’s been around. According to Wikipedia, Ray J is an “American singer, songwriter, television personality, actor, and businessman.”

He had a few albums in the 90’s, and last year he was on Celebrity Big Brother UK with other famous names, like Heidi Montag and Jedward.

Oh, yeah. He was also the other participant in the infamous Kim Kardashian sex tape.

Bloody hell, you buried the lede there, eh?

Okay, so let’s talk about the speaker, is it any good?

Well, it’s loud. Like, I kinda feel as though that’s the point of this whole device, to be loud.

If you laugh in the face of noise abatement orders, this speaker is the one for you.

If you really hate your neighbors, buy this.

The Raycon Turbo Cannon XL comes with a strap, allowing you to sling it over your shoulder, and be obnoxious anywhere your drum-and-bass-loving heart desires.

Yeah. As you’d expect from a device like this, bass is potent and thumpy (yes, that’s a word), and it sounds pretty decent at loud volumes. Unlike some cheaper speakers, it doesn’t become muddy or distorted as the decibels. It added a pretty exciting dimension to tracks like Bassline Junkie from Dizzee Rascal, and Shut Up from Stormzy.

Mids and highs were far less impressive, and tracks like Graffiti from CHVRCHES sounded flat and underwhelming.

That’s not where the Turbo Cannon XL lets itself down though.

So, a couple of things didn’t exactly enamor myself to it.

Firstly, while the device itself is fairly well built, there are some obvious cut-corners. The best example is the strap, which lacks any padding and is super uncomfortable to wear for any length of time. It’s also pretty prone to coming detached from the speakers, and a couple of times I’ve had to catch the Turbo Cannon XL to stop it from smashing on the floor.

The built-in FM tuner is so unbelievably terrible, like, I don’t actually have words to describe how badly designed it is.

Actually, yeah, I do, I’m a tech writer after all. So, here’s my main complaints:

Don’t get me wrong, I know most people will use this to listen to music from their phones, but if you’re going to include a feature, you’d best get it right.

So, what’s the verdict?

There’s a few things I really liked about the Turbo Cannon XL. It’s unspeakably loud, and boasts a really impressive thumping bass that puts other speakers to shame.

In addition, battery life is pretty solid. The speaker comes with a 1,850 mAh battery, and although that’s less than some other speakers, it’s still enough to keep the party going.

It just disappoints in a few key areas, including low and mid-range performance, and actual usability.

The good news is that it’s cheap as chips. The Raycon Turbo Cannon XL costs just $50, which is cheaper than some models from bargain-basement brands like VAVA and Anker.

We’ve reviewed some of these here, and if you’re looking for a more well-rounded audio experience, you might want to check them out. I’d also pay attention to Anker’s new SoundCore brand, which is releasing some pretty exciting models.