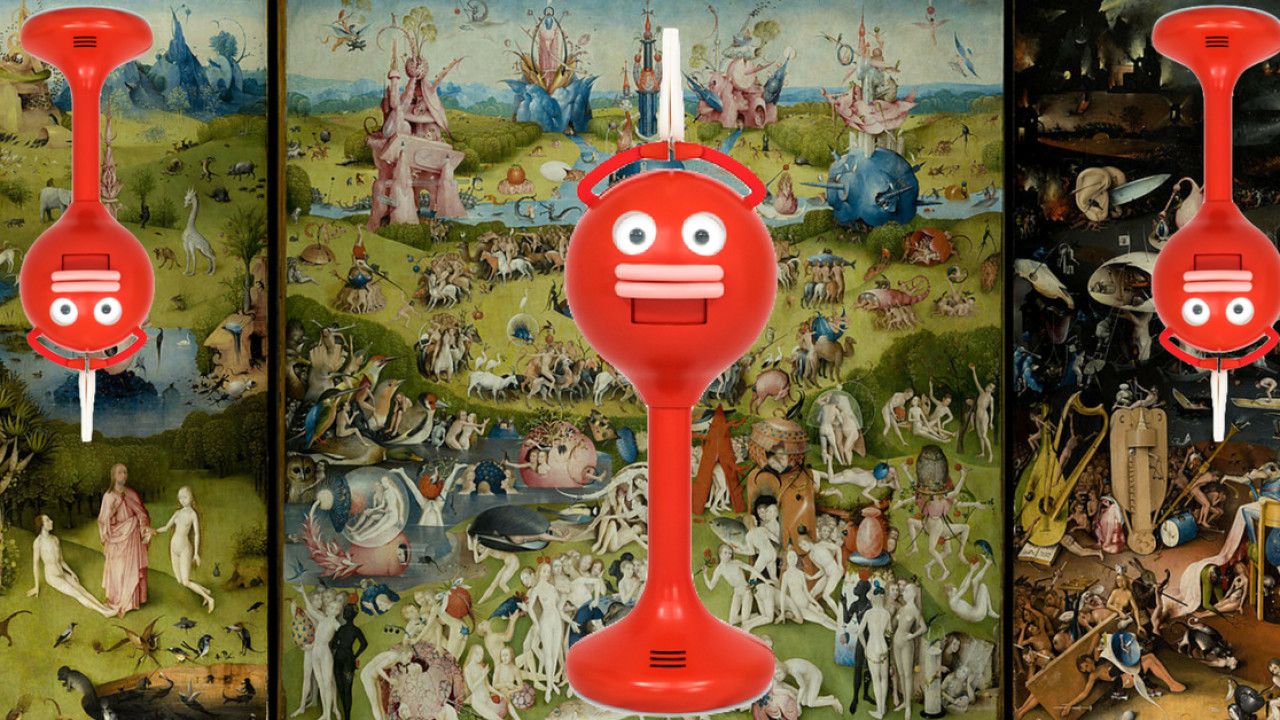 Have you ever sat on a hillside in the dead of the night, gazed towards the heavens, and thought, “why oh why, dear lord, isn’t there a red lollipop shaped robot that claps at my enemies?”

Yes, gather round and please welcome Big Clapper, the most Japanese invention since Japan.

Launched on Kickstarter yesterday, Big Clapper is described as having a “a roundish red body and a delightfully dapper expression.” To me, it’s got more of a ‘summoned from the depths of the inferno’ sorta vibe, but let’s not split hairs.

It works by using a motion sensor to recognize when someone is nearby. The 90cm-tall robot then claps and yells at them like a hellbeast. Pre-orders for the robot began in Japan in 2017, but now the company is raising funds to release 100 units of an English language version. May god help us all.

You’ll also be happy to hear that there’s an iOS app that connects to Big Clapper. If you sync the robot to iTunes, it’ll clap along to songs in a totally non-weird way. There’s also a function that lets you speak through Big Clapper. Talk into your phone and Big Clapper will repeat it in its dulcet tones.

Sorry, this is getting too upsetting, watch this video while I compose myself:

Sorry, did I forget to tell you about Big Clapper’s SOFT HANDS?

The company says this is for “realistic clapping.” But having stared into the wide, lifeless eyes of Big Clapper, I can’t stop imagining those manufactured soft hands dragging its round, red body jerkily across the floor, as I huddle in the corner of the room with nowhere to run. I scream and scream and scream, begging for a savior, but Big Clapper keeps on coming, keeps on moving with those soft hands, keeps on shouting at me to clap along.

It’s even worse when you consider Big Clapper has its origins in a clapping machine called “Onzu.”

Right, no more of that. What’s the actual point of Big Clapper?

Well, here are the places the company thinks you should use the robot:

Ignoring the “anywhere” part (a skydive? On a volcano? A funeral?), its main use seems to be in social or crowd settings. Now, I can see why this might be fun for a short period of time, but Big Clapper has the feel of a gimmick.

Masato Takahashi, the developer of Big Clapper, believes that because the device has “interactions with humans” and feels lifelike in “appearance and behavior,” that it moves beyond a gimmick, becoming, simply, “a robot.”

I’m not sure I agree, as robots can indeed be gimmicks, but hey.

Then we also have to consider that the early bird price of the Big Clapper costs over $4,000. Yep, I know.

Takahashi responded to this by saying the price of construction is higher than normal, as there are only a limited number of the devices being made. The inclusion of “expensive urethane resin” for Big Clapper’s “hands and lips” – you know, so they look real – also pushed the cost up. He went onto to say that Pepper costs around $10,000 and AIBO around $3,000, pointing out that Big Clapper is “not expensive” for a “robot product of this size.”

From what I can see though, both those robots – especially Pepper – can do more than Big Clapper. Still, I take Takahashi’s point, Big Clapper isn’t that crazily priced in comparison to the competition.

Should I… buy one?

You know what? Big Clapper has made one hell of an impression on me. And, as terrifying as the robot is, I would 100 percent have one by my desk clapping furiously at passers by.

There’s something attention-grabbing about it, so I reckon if you have a retail business and are looking to allure people walking past, you could do much worse.

Remember that Kickstarters often fail, even when they’ve been fully funded, so invest at your own risk. If you do wanna have a clapping robot friend, head over here.